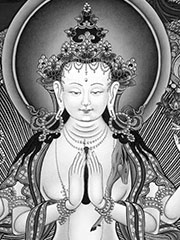 In Buddhist thought, a bodhisattva (Simplified Chinese: 菩萨; Traditional Chinese: 菩薩; Hanyu pinyin: púsà; Japanese: 菩薩 bosatsu; Korean: bosal) is a being who is dedicated to assisting all sentient beings achieve complete Buddhahood. Conventionally, the term is applied to hypothetical beings with a high degree of enlightenment. Bodhisattva literally means a «wisdom (‘bodhi’) being (‘sattva’)» in Sanskrit.

In Theravada Buddhism, the bodhisattva (Pali: bodhisatta) is seen as seeking enlightenment so that, once awakened, he or she may efficiently aid other beings with the expertise of supreme wisdom. Gautama Buddha‘s previous life experience as a bodhisattva before Buddhahood are recorded in the texts of the jataka. Lay Buddhists of Theravada seek inspiration in Gautama’s skill as a good layman in these texts, which account not only his historical life, but many previous lives. When Gautama Buddha referred to himself in his pre-Buddha existence, he spoke in terms of «when I was still a Bodhisattva». The only currently active bodhisattva described in the Pali Canon is the future Buddha Maitreya (Pali: Metteyya). The Theravada tradition, i.e., the Pali Canon, speaks of no other bodhisattvas than these.

In Mahayana Buddhism, a bodhisattva has the compassionate determination to aid all beings on their quest for the highest state of development, full enlightenment of a Buddha. This type of motivation is known as bodhicitta. Remaining in this world of uncontrolled rebirth (samsara), the Bodhisattva has taken the bodhisattva vow to achieve Buddhahood as quickly as possible and thereby be most able to teach Dharma until all beings have likewise achieved enlightenment.

In brief, simply imagine the Bodhisattva as saying, «If I know how to swim, and even one other being cannot, then it is right to remain behind in this world to assist them until they know how to save themselves from drowning».

Mahayana Buddhist philosophy sometimes poses the concept of the bodhisattva in opposition to that of the Sravaka-Buddha (conventionally referred to as an Arhat). The Arhat is seen as being possessed of ultimate enlightenment, but he did not choose to save all and every other living being before passing away into Parinirvana.

According to many traditions within Mahayana Buddhism, on his or her way to becoming a Buddha, the bodhisattva proceeds through ten, or sometimes fourteen, stages or bhumi. Below is the list of ten bhumis and their descriptions from The Jewel Ornament of Liberation, a treatise by Gampopa, an influential teacher of the Tibetan Kagyu school. Other schools give variant descriptions.

Before a bodhisattva arrives at the first ground, he or she first must travel the first two of the five paths, which are said to correspond to words from the mantra that appears at the end of the Heart Sutra:

The 10 Grounds of Buddhism

After the ten bhumis, according to Mahayana Buddhism, one attains complete enlightenment and becomes a Buddha.

Various traditions within Buddhism believe in certain specific bodhisattvas. Some bodhisattvas appear across traditions, but due to language barriers may be seen as separate entities. For example, Tibetan Buddhists believe in Chenrezig, who is Avalokitesvara in India, Kuan Yin (other spellings: Guan Yin, Kwan Yin, Quan Yin) in China, and Kannon in Japan. A modern bodhisattva for many is the 14th Dalai Lama, considered by many followers of Tibetan Buddhism to be an incarnation of that same bodhisattva, the Bodhisattva of Compassion.

The bodhisattva is a popular subject in Buddhist art.

The place of a bodhisattva’s earthly deeds, such as the achievement of enlightenment or the acts of dharma, is known as a bodhimandala, and may be a site of pilgrimage. Many temples and monasteries are famous as bodhimandalas; for instance, the island of Putuoshan, located off the coast of Ningbo, is venerated by Chinese Buddhists as the bodhimandala of Avalokitesvara. Perhaps the most famous bodhimandala of all is the bodhi tree under which Shakyamuni achieved buddhahood.

Some, mainly American convert Buddhists including Jack Kerouac, are recently incorporating Jesus into Buddhism by claiming he is a bodhisattva.