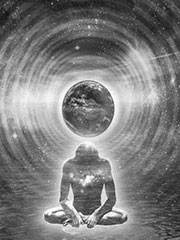 In the Indian religions Buddhism, Jainism and Hinduism, nirvāna (from the Sanskrit निर्वाण, Pali: Nibbāna — Chinese: 涅槃; Pinyin: niè pán), literally «extinction» and/or «extinguishing», is the culmination of the yogi’s pursuit of liberation. Hinduism and Jainism also use the word nirvana to describe the state of moksha, and it is spoken of in several Hindu tantric texts as well as the Bhagavad Gita.

Etymologically, nirvana (Pali Nibbana) in sutra is «bhavanirodha nibbanam» (The subjugation of becoming means Nirvana). Nirvana in sutra is never conceived of as a place, but the antinomy of samsara (see below) which itself is synonymous with ignorance (avijja). “This said: ‘the liberated mind/will (citta) which does not cling’ means Nibbana”. Nibbana is meant specifically as pertains gnosis which ends the identity of the mind (citta) with empirical phenomena. Doctrinally Nibbana is said of the mind which no «longer is coming (bhava) and going (vibhav)», but which has attained a statis in perpetuity, whereby «liberation (vimutta) can be said».

Gautama Buddha sometimes refers to nirvana as amata («immortality»). Elsewhere the Buddha calls nirvana ‘the unconditioned element’ (i.e., that which is not subject to causation). Nirvana is impossible to define directly; it can only be experienced or realized. One may not even be able to say this, since saying this implies the existence of an experiencing subject—which in fact would not persist after full nirvāna. While some of the associated effects of nirvana can be identified, a definition of nirvāna can only be approximated by what it is not. It is not the clinging existence with which man is understood to be afflicted. It is not any sort of becoming. It has no origin or end. It is not made or fabricated. It has no dualities, so that it cannot be described in words. It has no parts that may be distinguished one from another. It is not a subjective state of consciousness. It is not conditioned on or by anything else.

Calling nirvana the «opposite» of samsara or implying that it is apart from samsara is doctrinally inaccurate. They are in fact identical according to early Mahayana Buddhism. Both in early Buddhism and by the time of Nāgārjuna, there are teachings of the identity of nirvana and samsara. However, even here it is assumed that the natural man suffers from at the very least a confusion regarding the nature of samsara.

However, in certain Mahayana teachings of the Buddha, Nirvana, or «Great Nirvana» in particular (higher than «ordinary» Nirvana), is said to be the sphere or domain («visaya») of the True Self. In the «Mahayana Mahaparinirvana Sutra«, as well as in a number of other important Mahayana sutras, Great Nirvana is seen as the state which constitutes the attainment of that which is «Eternal, Self, Bliss, and Pure». Maha-nirvana thus becomes equivalent to the ineffable, unshakeable, blissful, all-pervading and deathless Selfhood of the Buddha himself — a mystery which no words can adequately reach and which can only be fully known by an Awakened Being directly.

Vitally, according to Mahayana teachings, any being who has reached Nirvana is not blotted out or extinguished: there is the extinction of the impermanent and suffering-prone «worldly self» or ego, but not of the immortal «supramundane» Self of the indwelling Buddha. The Buddha states in the «Mahayana Mahaparinirvana Sutra» (Tibetan version): «Nirvana is deathless .. Those who have passed into Nirvana are deathless. I say that anybody who is endowed with careful assiduity is not compounded and, even though they involve themselves in compounded things, they do not age, they do not die, they do not perish.» We must pass beyond this world, we must transcend time and space- ascend Jacob’s ladder, enter the World of True Forms, of which Plato spoke. There we shall behold the archetypes, it is the Absolute Mind, the Universal Being..