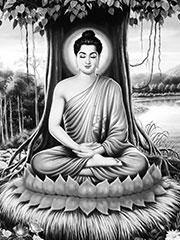 Bodhi (Pāli and Sanskrit. Lit. awakening) is a title given in Buddhism to the specific awakening experience attained by the Indian spiritual teacher Gautama Buddha and his disciples. It is sometimes described as complete and perfect sanity, or awareness of the true nature of the universe. After attainment, it is believed one is freed from the cycle of Samsāra: birth, suffering, death and rebirth. Bodhi is most commonly translated into English as enlightenment, though this translation is problematic, since enlightenment (the soul being «lit» by a higher power) is originally a concept from Christian mysticism or conversely evokes notions of the 18th century European Age of Enlightenment that are not identical with the Buddhist concept of Bodhi. There is no image of «light» contained in the term, «Bodhi» — rather, it expresses the notion of awakening from a dream and of being aware and Knowing (Reality). It is thus preferable to think of Bodhi as spiritual «Awake-ness» or «Awakening», rather than «enlightenment» (although it is true that imagery of light is extraordinarily prevalent in many of the Buddhist scriptures).

Bodhi is attained only by the accomplishment of the Paramitas (perfections), when the Four Noble Truths are fully grasped, and when all karma has reached cessation. At this moment, all greed (lobha), aversion (dosa), delusion (moha), ignorance (avijjā), craving (tanha) and ego-centered consciousness (attā) are extinguished. Bodhi thus includes anattā, the absence of ego-centeredness.

Certain Mahayana Buddhist sutras stress that Bodhi is always present and perfect, and simply needs to be «uncovered» or disclosed to purified vision. Thus the «Sutra of Perfect Awakening» has the Buddha teach that, like gold within its ore, Bodhi is always there within the being’s mind but requires the obscuring mundane ore (the surrounding defilements of samsara and of impaired, unawakened perception) to be removed. The Buddha declares:

«Good sons, it is like smelting gold ore. The gold does not come into being because of smelting .. Even though it passes through endless time, the nature of the gold is never corrupted. It is wrong to say that it is not originally perfect. The Perfect Enlightenment of the Tathagata is also like this.»

Similar doctrines are encountered in the Tathagatagarbha sutras, which tell of the immanent presence of the Buddha Principle (Buddha-dhatu/ Buddha-nature) within all beings. Here, the Tathagatagarbha (Buddha-Matrix) is tantamount to the indwelling transformative and liberational power of Bodhi, which bestows an infinitude of unifying vision. The Buddha of the Shurangama Sutra states:

«My uncreated and unending profound Enlightenment accords with the Tathagatagarbha, which is absolute Bodhi, and ensures my perfect insight into the Dharma realm , where the one is infinite and the infinite is one.»

The Bodhi tree is a specimen of the Sacred Fig (Ficus religiosa) in what is now the town of Bodhgaya. It was while sitting in meditation under this tree that Siddhartha Gautama became enlightened. In the legends of Mahayana Buddhism, it was said that Queen Maya held a branch of one of these trees while resting in Lumbini Garden and her son, Siddhartha, was born.

Those who study the teaching of a samma-sambuddha and then attain enlightenment in this world are known as Arhats. Such beings are skilled at helping others to reach enlightenment as they may draw on personal experience.

Those who obtain enlightenment through self-realisation, without the aid of spiritual guides and teachers, are known as pratyekabuddhas. According to the Tripitaka, such beings only arise in ages where the dharma has been lost. Their skill in helping others to obtain enlightenment is inferior to that of the arhats, but one need to accumulate paramis in a much long time to become a pratyekabuddha than an Arhat. Many pratyekas may arise at a single time.

These are perfect, most developed, most compassionate, most loving, all knowing beings who fully comprehend the dhamma by their own efforts and wisdom and teach it skillfully to others, freeing them from Samsāra. One that develops Sammā-Sambodhi is known as samma-sambuddha, and it is needed much more time of parami accumulation here than to become a pratyekabuddha

When you get to this, then thoughts become still without being stilled, calmness and insight arise without being produced, the mind of the buddhas appears without being revealed. To try to liken it to the body of cosmic space or the light of a thousand suns would be to be further away than the sky is from the earth.
— Wei-tse

To be a living being is not the ultimate state; there is something beyond, much more wonderful, which is neither being nor non-being, neither living nor not-living. It is a state of pure awareness, beyond the limitations of space and time. Once the illusion that the body-mind is oneself is abandoned, death loses its terror, it becomes a part of living.
— Sri Nisargadatta Maharaj