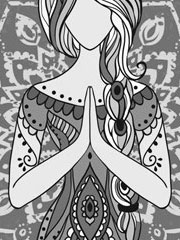 A mantra is a religious syllable or poem, typically from the Sanskrit language. Their use varies according to the school and philosophy associated with the mantra. They are primarily used as spiritual conduits, words or vibrations that instill one-pointed concentration in the devotee. Other purposes have included religious ceremonies to accumulate wealth, avoid danger, or eliminate enemies. Mantras originated in India with Vedic Hinduism and were later adopted by Buddhists and Jains, now popular in various modern forms of spiritual practice which are loosely based on practices of these Eastern religions.

The word mantra is a Sanskrit word consisting of the root man- «manas or mind» and the suffix -tra meaning, tool, hence a literal translation would be «mind tool». Mantras are interpreted to be effective as sound (vibration), to the effect that great emphasis is put on correct pronunciation (resulting in an early development of a science of phonetics in India). They are intended to deliver the mind from illusion and material inclinations. Chanting is the process of repeating a mantra.

Some other mantras used by Tibetan Buddhists

The following list of mantras is from Kailash — Journal of Himalayan Studies, Volume 1, Number 2, 1973. (pp. 168-169) (augmented by other contributors). It also includes renderings of Om mani padme hum.

Please note that the word swaha is sometimes shown as svaha, and is usually pronounced as ‘so-ha’ by Tibetans. Spellings tend to vary in the transliterations to English, for example, hum and hung are generally the same word. The mantras used in Tibetan Buddhist practice are in Sanskrit, to preserve the original mantras. Visualizations and other practices are usually done in the Tibetan language.

Mantra in other traditions or contexts

Transcendental Meditation, also known simply as ‘TM’, uses simple mantras as a meditative focus. TM was founded by the Maharishi Mahesh Yogi. According to the TM website (see below) the practice can result in a number of material benefits such as relaxation, reduced stress, better health, better self image; but it can also benefit the world by reducing violence and crime, and generally improve quality of life. The founder was well versed in Hindu tradition, but TM attempts to separate itself from that tradition these days. Simple two-syllable mantras are used.

Mantra practice has also been enthusiastically taken up by various New Age groups and individuals, although this is typically out of context, and from the point of view of a genuine Hindu or Buddhist practitioner lacks depth. The mere repetition of syllables can have a calming effect on the mind, but the traditionalist would argue that mantra can be an effective way of changing the level of one’s consciousness when approached in traditional way.

Some forms of Jewish meditation use mantras, although they do not call them by that name. Hasidic Jews sing phrases from the Hebrew Bible over and over, in a form of rhythmic chant, often accompanied by drumming on the table. They also use wordless sacred meditation tunes called niggunim, which are revealed thorugh the higher consciousness of the Rebbes (Hasidic leaders, similar to gurus). Some subgroups of the Breslov Hasidic movement use the mantra Na Nach Nachma, based on the name of their founder, Rabbi Nachman of Breslov. All of these practices are done to achieve deveikut which means «cleaving (holding on) to God.» Lubavitch Hasidim of the messianic faith use the mantra of Yechi to draw on the power of their Rebbe.

The spiritual exercises of Surat Shabda Yoga include simran (repetition, particularly silent repetition of a mantra given at initiation), dhyan (concentration, viewing, or contemplation, particularly on the Inner Master), and bhajan (listening to the inner sounds of the Shabda or the Shabda Master).

In the Islamic Sufi tradition, chants of the 99 Names of Allah are popular invocations of attibutes as are the names of the Prophet.

In Neo-Pagan ritual, deities may be invoked by a recitation of their many names or aspects.

In Christianity, repetitive prayer using prayer beads such as a rosary or chotki includes well known mantras such as the Jesus prayer and Hail Mary. A form of Christian meditation was taught by Dom John Main that involves the silent repetition of a mantra.