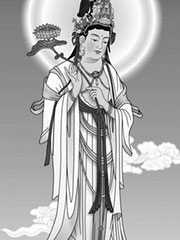 Mahāsthāmaprāpta (Ch 大勢至 Da Shì Zhì, Jp. 勢至 Seishi) is a Buddhist bodhisattva that represents the power of wisdom and is often depicted in a trinity with Amitabha and Avalokitesvara. In Chinese Buddhism, he is usually portrayed as a woman, with a likeness similar to Guan Yin. He is also one of the Japanese Thirteen Buddhas.