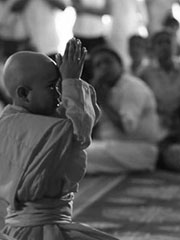 Theravada (Pali; Sanskrit: Sthaviravada) is one of the eighteen (or twenty) NikÄya schools that formed early in the history of Buddhism. These developed in India during the century subsequent to the death of the Buddha. The name of the school means «Teachings of the Elders» which implies that this was the most conservative school of Buddhism, a school that has attempted to conserve the original teachings of the Buddha. Adherents trace their lineage back to the Sthaviras (Pali: Theras; «Elders») of the First Buddhist Council when 500 arahants, including Mahakasyapa chose a position of orthodoxy to keep all the «lesser and minor» rules set by Gautama Buddha.

It is sometimes spuriously labeled as Hinayana («Inferior Vehicle») in opposition to the Mahayana («Greater Vehicle»), but this term is now widely seen as either inaccurate or derogatory.

Theravada promote the concept of Vibhajjavada (Pali), literally «Teaching of Analysis» which uses critical methods of investigation as opposed to blind faith. With this method the answer has to be discovered by the aspirant, after being convinced by valid thought and experience, in order to reach the first glimpse of the goal.

The Theravadins goal is the achievement of the state of Arahant (lit. «worthy one», «winner of Nibbana«), a life where all (future) birth is at an end, where the holy life is fully achieved, where all that has to be done has been done, and whereupon there is no more returning to the worldly life. In the Theravadin view, the attainment of arahatship is equal in every way to the realization attained by the Buddha himself. The Buddha remains a figure of respect and worship even for arahats because he was able to attain nibbana without the aid of any teacher or outside instruction—he is said to be ‘fully self-enlightened’ in many Pali verses of praise. Only after the development of the Mahayana did the insight or knowledge attained by an arhat come to be seen as a lesser form of that attained by the Buddha himself.

Traditionally, Theravada Buddhism has observed a distinction between the practices suitable for a lay person and the practices undertaken by ordained monks (and, in ancient times, nuns). While the possibility of significant attainment by laymen is not entirely disregarded by the Theravada, it occupies a position of significantly less prominence than in the Mahayana and Vajrayana traditions. This distinction — as well as the distinction between those practices advocated by the Pali Canon, and the folk religious elements embraced by many monks — have motivated some scholars to consider Theravada Buddhism to be composed of multiple separate traditions, overlapping though still distinct. Most prominently, the anthropologist Melford Spiro in his work Buddhism and Society separated Burmese Theravada into three groups: apotropaic Buddhism (concerned with providing protection from evil spirits), kammatic Buddhism (concerned with making merit for a future birth), and Nibbanic Buddhism (concerned with attaining the liberation of nibbana, as described in the Tipitaka). These categories are not accepted by all scholars, and are usually considered non-exclusive by those who employ them.

The diversity of Buddhist thought has sometimes led to criticism of Theravada by other schools, although it is important to note that such criticism is far from universal, and that Buddhists of different schools often interact on terms of mutual respect. Common critiques of Theravada made by Mahayana Buddhists are that Theravada monks aim to achieve enlightenment only for themselves, and that they lack compassion. However, supporters of Theravada emphasize that their religion does not recognize a self at all—famously, as noted in the canonical , sometimes translated as «all phenomena are not-self». As for supposed lack of compassion, metta (often translated as «loving kindness» or «good will») is among Theravada’s 10 perfections. Theravadans frequently meditate on metta and focus on metta.