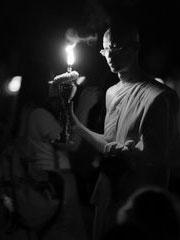 Vassa (Thai พรรษา, pansa or phansaa), also called Rains Retreat, is the traditional retreat during the rainy season lasting for three lunar months from July to October. During this time Buddhist monks remain in a single place, generally in their temples. In some monasteries, monks dedicate the Vassa to intensive meditation practice. During Vassa, many Buddhist lay people reinvigorate their spritual training and adopt more ascetic practices, such as giving up meat, alcohol, or smoking (Vassa is sometimes known as «Buddhist Lent»). And in countries such as Thailand, the laity will often take monastic vows for the Vassa period and then return to lay life. Commonly, the number of years a monk has spent in monastic life is expressed by counting up the number of Vassas he has observed.