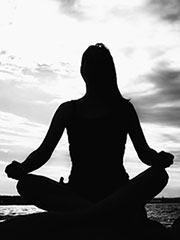 Anapana Sati, meaning mindfulness of breathing («sati» means mindfulness, «ānāpāna» refers to breathing) is a basic form of meditation taught by the Buddha. According to the Buddha’s teaching in the anapanasati Sutra, practicing mindfulness of breathing meditation as a part of the Noble Eightfold Path leads to the removal of all defilements (kleśas) and finally the attainment of Nibbana. Buddha‘s teaching was based on his own experience in using anapanasati as part of his means of achieving his own enlightenment. However, mindfulness of breath should be practiced along with mettā bhāvanā so one does not withdraw from the world and lose emotional attachment and compassion (Kamalashila 1996).

The anapanasati Sutra is specifically about the mindfulness of in-and-out breathing. It recommends the practice of ānāpānasati meditation as a means of cultivating the seven factors of awakening: mindfulness, discernment, and persistence, which leads to rapture (pīti), then to calm (sukha), which in turn leads to concentration and then to equanimity (ṣanti). Finally, the Buddha taught that with these factors developed in this progression, that the practice of ānāpānasati would lead to release or nirvana.

The practice of anapanasati varies. Typically, to begin, one needs to sit in a comfortable position, with the back and neck straight. It is also helpful if one can find a comfortable and peaceful environment.

Tutors will explain that an untrained mind constantly has thoughts interrupting one’s focus. Like the waves in the ocean, thoughts arise, and they slowly fall away. If one disregards the thoughts, they slowly wither and disappear. On the other hand, if one pays attention, then soon one is lost in a web of thoughts.

Practitioners are tutored to avoid being disrupted by passing thoughts and to nudge themselves into concentrating on the breathing once again.

Formally, there are sixteen stages — or lessons — of anapanasati which are divided into four tetrads. The first four steps involve focusing the mind on breathing, which is the body-conditioner (kāya-sankhāra in Pali). The second tetrad involves focusing on the feelings (vedanā), which are the mind-conditioner (citta-sankhāra). The third tetrad involves focusing on the mind itself (citta), and the fourth tetrad focuses on «the truth» (dhamma). (Compare right mindfulness.)