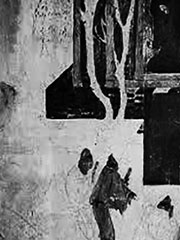 The Sarvastivada (roughly, «Proclaiming that all exist») —a reference to one of the distinguishing doctrines of the school, the existence of dharmas in all of «the three times» (past, present, and future).

The Sarvastivada are one of only two of the «Early Schools» of Buddhism to have their written works survive in substantial, whole books unto the present day. Thus, their importance to modern scholars may be greater than their share of popular adherents had been.

Among the defining canonical texts composed by the Sarvastivada was the Maha-vaibhasa-abhidharma-shastra, traditionally considered a systematization of the spoken teachings of Gautama Buddha. This text reflects the unique Sarvastivadin cosmology and ontology, a byzantine structure of essences and universals.

The basic approach of the Sarvastivada was to regard the universe as reducible to various elements or co-efficients of existence; apparently, these were determined by taking lists of the various «indivisible» factors and substances named in the Buddha’s dialogues. Heat, for instance, was the «lakshana» (distinguishing mark) of fire, and there was a common «dharma» relating all fire. The Abhidharma’s approach led to many fascinating insights, including an anticipation of Newton’s colour theory (specifying that white light is composed of coloured light, and then explaining those primary colours in terms of «lakshana» and «dharma»), and some very detailed systems of psychology.

Among the critics of the Sarvastivada was Nagarjuna, who completely repudiated their interpretation of the Buddha’s teaching as implying atom-like unities at the basis of visible phenomena, and many of the other features of their philosophy, such as a complex theory of causality and (as mentioned) time.

Ironically it was Vasubandhu, one of Nagarjuna’s followers, who put the Sarvastivada philosophy into the form in which it is most read (and used) in Buddhist religious practice today: the Abhidharma-kosa.