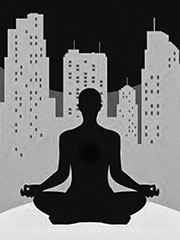 Dhyāna is a term in Sanskrit which refers to a type or aspect of meditation. It is a key concept in Hinduism and Buddhism.

Equivalent terms are jhāna in Pāli, chán in Chinese, and zen in Japanese.

In the Pali Canon the Buddha describes eight progressive states of absorption meditation or Jhana. The first four are connected to the physical realm and the last four only with the mental realm (i.e. there is no experience of the body in the four higher Jhanas). It must be noted that these states are not the final goal that the Buddha taught since they are all still in the field of mind and matter. The final goal of Nibbana (Sanskrit:Nirvana) is the experience beyond mind and matter.

In East Asia, several schools of Buddhism were founded that focused on dhyana, under the names Chan, Zen, and Seon. According to tradition, Bodhidharma brought Dhyana to the Shaolin temple in China, through Tibet, where it came to be known first as chan, and then zen.

As the meditator reaches this first Jhana, he can meditate without being disturbed by any thought or desire, though thoughts are still there.

All intellectual processes cease. There is only rapture, happiness, and the object.

Even happiness disappears, leading to a state with neither pleasure nor suffering. The Buddha described the Jhanas as «the footsteps of the tathagata«.
Traditionally, this fourth Jhana is seen as the beginning of attaining psychic powers.

These four are rupajhanas, material jhanas. An additional four arupajhanas still consist in the two factors of Upekkha and Ekaggata.
Arupajhanas are non-material jhanas and are described by their mental object :

Usually Jhanas are exposed as part of Samatha‘s practice, as opposed to Vipassana. But Vipassana jhanas are also mentioned. When the awareness of the arising and passing of physical sensations is maintained during the first four Jhanas they are Vipassana Jhanas.

According to the Hindu Yoga Sutra dhyana is one of the eight methods of Yoga, (the other seven methods are Yama, Niyama, Asana, Pranayama, Pratyahara, Dharana, and Samadhi).

The Dhyana Yoga system is specifically described by Sri Krishna in chapter 6 of the famous Bhagavad Gita, wherein He explains the many different Yoga systems to His friend and disciple, Arjuna.