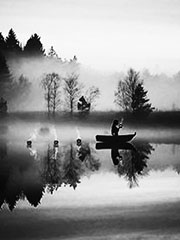 Samatha (Pāli; Sanskrit: śamatha), refers to the practice of «Tranquility» or «concentration» meditation. Buddhism somewhat considers meditation in general to be an act of concentration on a particular object and/or idea. Therefore, meditation from other religious traditions are sometimes refered to as a variation of samatha meditation that differ in the focus of concentration; such as breathing, scriptual passage, mantra, religious picture, a rock, body (as a representation of death), and so on. In this sense, samatha is not a Buddhist meditation.

For Buddhists, it is commonly practiced as a prelude to and in conjunction with Vipassanā meditation (insight meditation) which focus on Buddhist dharma. Traditionally, there are 40 objects of meditation, although the breath as an object of meditation has always enjoyed the widest popularity. Mindfulness of breathing or ānāpāna meditation which accompany Buddhist doctrine of rising and falling can be used for both Samatha and Vipassanā Meditation.

Samatha lead to states of meditative absorption or concentration called Jhana which is often translated as state of tranquility or bliss. Thus, it furthers the right concentration aspect of the Noble Eightfold Path.