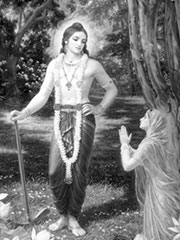 In Hinduism, an avatar or avatara (Sanskrit अवतार), is the incarnation (bodily manifestation) of an Immortal Being, or of the Ultimate Supreme Being. It derives from the Sanskrit word avatāra which means «descent» and usually implies a deliberate descent into mortal realms for special purposes. The term is used primarily in Hinduism, for incarnations of Vishnu the Preserver, whom many Hindus worship as God. The Dasavatara (see below) are ten particular «great» incarnations of Vishnu.

Unlike Christianity and Shaivism, Vaishnavism believes that God takes a special (including human) form whenever there is a decline of righteousness (dharma) and rise of evil. Lord Krishna, an avatar of Vishnu, according to Vaishnavism that is espoused by Ramanuja and Madhva, and God in Gaudiya Vaishnavism, said in the Gita: “For the protection of the good, for destruction of evil, and for the establishment of righteousness, I come into being from age to age.” (Bhagavad Gita, Chapter 4, verse 8.) In any event, all Hindus believe that there is no difference between worship of Vishnu and His avatars as it all leads to Him.

The word has also been used by extension to refer to the incarnations of God in other religions, notably Christianity, for example Jesus.

The philosophy reflected in the Hindu epics is the doctrine of the avatar (incarnation of Vishnu as an animal or a human form). The two main avatars of Vishnu that appear in the epics are Rama, the hero of the Ramayana, and Krishna, the advisor of the Pandavas in the Mahabharata. Unlike the superhuman devas (gods) of the Vedic Samhitas and the abstract Upanishadic concept of the all-pervading Brahman, the avatars in these epics are intermediaries between the Supreme Being represented as either Saguna Brahman or Nirguna Brahman and mere mortals.

This doctrine has had a great impact on Hindu religious life, for to many it means that God has manifested Himself in a form that could be appreciated even by the least sophisticated. Rama and Krishna have remained prominent as beloved and adored manifestations of the Divine for thousands of years among Hindus. The Upanishadic concept of the underlying unity of Brahman is revered by many to be the pinnacle of Hindu thought, and the concept of the avatars has purveyed this concept to the ordinary Hindu as an expression of the manifestation of the Hindu’s highest single divinity as an aid to humanity in difficult times. The Hindu cycle of creation, evolution, and destruction contains the essence of the idea of «avatars» and indeed relies on a final avatar of Vishnu, that of Kalki, as the final evolutionary avatar before destruction at the end of the world.

Aside from Rama and Krishna there are many other human or animal forms which appeared on earth or elsewhere in the universe. Scriptures do not describe any appearance as an avatar by Brahma or Shiva (they are themselves listed as guna avatars) of nirguna Brahman, but emanations of Vishnu have appeared a number of times. Some Hindus, based on the Ramayana, aver that Shiva incarnated once as the monkey-god Hanuman. Hanuman is more well-known as the son of Vayu, the deva of wind or his emanation. (Hanuman lived in a jungle in Treta Yuga and is called vanara, which means people having characteristics of monkey, and was one of the greatest devotees of Vishnu).

The Ten Avatars, or Dasavatara

The Maha Avatara (Great Avatars) of Vishnu are usually said to be ten and this is popularly known as the Dasavatara (dasa (dasha) in Sanskrit means ten). The first four of the ten avatars have appeared in the Satya Yuga (the first of the four Yugas or epochs that comprise one Mahayuga — for more details please read the section above on Lord Brahma). The next three avatars appeared in the Treta Yuga, the eighth incarnation in the Dwapar Yuga and the ninth in the Kali Yuga. The tenth is expected to appear at the end of the Kali Yuga.

The 25 Avatars of the Puranas

The Puranas list twenty-five avataras of Vishnu. A description of these is found in the Bhagavata Purana, Canto 1.

The Ninth Avatar: Balarama or Buddha?

Many claim that the ten avatars represent the evolution of life and of mankind on earth. Matsya, the fish, represents life in water. Kurma, the tortoise, represents the next stage, amphibianism. The third animal, the boar Varaha, symbolizes life on land. Narasimha, the Man-Lion, symbolizes the commencement development of mammals. Vamana, the dwarf, symbolizes this incomplete development of human. Then, Parashurama, the forest-dwelling hermit armed with an axe, connotes completion of the basic development of humankind. The King Rama signals man’s ability to govern nations. Krishna, an expert in the sixty-four fields of science and art according to Hinduism, indicates man’s advancement in culture and civilization. Balarama, whose weapon was a plough could stand for the development of agriculture. Buddha, the enlightened one, symbolizes social advancement of man.

Note that the time of the avatars also has some significance: Thus, kings rule reached its ideal state in Treta Yuga with Rama Avatar and social justice and Dharma were protected in Dwapar Yuga with the avatar of Krishna. Thus the avatars represent the evolution of life and society with changing epoch from Krita Yuga to Kali yuga. The animal evolution and development connotations also bear striking resemblances to the modern scientific theory of Evolution.

For more details on this topic, see List of people considered to be avatars.

Besides the ten traditional avatars of Hinduism, some other Indian Hindus are considered to be avatars by themselves or by others. Some of these include:

Some Hindus with a universalist outlook view the central figures of various non-Hindu religions as avatars. Many others Hindus reject the idea of avatars outside of traditional Hinduism. Some of these religious figures include:

The label of avatar has been used by others outside of the Indian subcontinent and the umbrella of mainstream religions. Some of these are:

Many new religious movements related to Hinduism (see Contemporary Hindu movements), many of them cults, have more contentious views, including a tendency in modern times to place their guru as ishta-deva. This is of course an unpopular view both in the minds of orthodox Hindus, as well with outsiders who often misunderstand this phenomenon as a tendency common within Hinduism.

Swami Tapasyananda of Ramakrishna Mission, on commentating about this phenomenon, said:

The avatar doctrine has been excessively abused by many Hindus today and we have the strange phenomenon of every disciple of a sectarian Guru claiming him to be an avatar. Christianity has therefore limited the Divine Incarnation as an one-time phenomenon. The theory has strong points and equally strong defects but it surmounts the gross abuse of the doctrine indulged in by many Hindus.

Thus, if followers respect and revere the guru, it is only proper if they are using him as a conduit to God, and respect him as a teacher.

However, Swami Sivananda has said that a guru can be likened to God if he himself has attained realization and is a link between the individual and the Absolute. Such a guru, according to his definition and interpretation, should have actually attained union with God, inspire devotion in others, and have a presence that purifies all. Such a case is limited in contemporary times.

As early as the 17th century, the great Vaishnavite saint, Raghavendra Swami, in his last speech before departing from the mortal world, warned about the dangers of fraudulent gurus by saying:

«The search for knowledge is never easy. As the Upanishads say it is like walking on the razor’s edge. But for those who have strong faith and put in sustained effort and have the blessings of Shi Hari and guru this is not difficult. Always keep away from people who merely perform miracles without following the shastras and yet call themselves God or guru. I have performed miracles, and so have great persons like Shrimadacharya. These are based on yoga siddhi and the shastras. There is no fraud or trickery at all. These miracles were performed only to show the greatness of God and the wonderful powers that one can attain with His grace. Right knowledge (jnana) is greater than any miracle. Without this no real miracle can take place. Any miracle performed without this right knowledge is only witchcraft. No good will come to those who perform such miracles and also those who believe in them.»