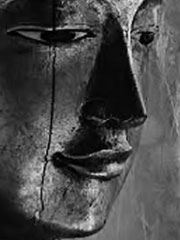 Upaya is a term in Mahayana Buddhism which is often translated as «means», though literally «expedient» would be more accurate, as «upaya» (from upa√i) refers to something which goes or brings you up to something (i.e., a goal).

The term is often used with kaushalya («cleverness»); upaya-kaushalya means roughly «skill in means». Upaya-kaushalya is a concept which emphasizes that practitioners may use their own specific methods or techniques in order to cease suffering and introduce others to the dharma. The implication is that even if a technique, view, etc., is not ultimately «true» in the highest sense, it may still be an expedient practice to perform or view or hold; i.e., it may bring the practitioner closer to true realization anyway.

One consequence of this is that it is possible to endorse a form of Buddhist practice as viable while simultaneously critiquing its premises or contrasting it unfavorably to another, higher practice. In some Mahayana texts, such as the Lotus Sutra, this is used as a polemic device against earlier Buddhist traditions; it is said that the Buddha gave them various upayas rather than revealing the ultimate truth, for which they were not ready.

In a famous story from the Lotus Sutra, often given as an example of upaya, is that of a man who comes home to find his house on fire and his children inside entertaining themselves with their favorite playthings. He calls out to his children to leave the house, but they do not believe it to be on fire, and they do not stop playing with the toys. Thinking about how he may use expedient means, the man tells his children that he has arranged for a them to receive gilded carts and toy oxen play with, and that these entertainments await just outside the gate of the house. Hearing this, the children run from the burning house and are saved.

The most important concept in skill in means is the use, guided by wisdom and compassion, of a specific teaching (means) geared to the particular audience taught. Edward Conze, in A Short History Of Buddhism, says «‘Skill in means’ is the ability to bring out the spiritual potentialities of different people by statements or actions which are adjusted to their needs and adapted to their capacity for comprehension.»

The concept of skillful means becomes important in Mahayana Buddhism with regards to the actions of a bodhisattva. The idea is that a bodhisattva or practitioner may use any expedient methods in order to help ease the suffering of people, introduce them to the dharma, or help them on their road to nirvana.

This doctrine is sometimes used to explain some of the otherwise strange or unorthodox behaviour engaged in by Buddhist practitioners in certain cases. In employing skillful means, it becomes theoretically possible that many seemingly proscribed practices, such as violence, theft, and sexuality could be seen as use of skillful means. The use of harsh violence to one’s disciples has occasionally been used as a way of opening their eyes to the nature of self and suffering; an example is the story of a Zen priest who ended a conversation with a disciple by slamming shut a door on the disciple’s leg, fracturing the leg and, according to the story, causing a deep insight in the disciple. There are a number of other stories of Buddhist saints and bodhisattvas taking part in fairly eccentric and unusual behaviours in the practice of skillful means.

The practices and rituals of Vajrayana Buddhism are also often interpreted as a process of skillful means. They are understood to be means whereby practitioners use the very misconceptions and properties of mundane existence to help themselves reach enlightenment.