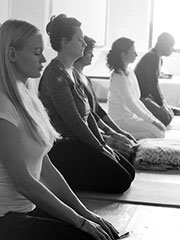 There are many divisions and subdivisions of the schools of Buddhism. An extensive list of historical schools is given below according to lineage.

Surviving schools can be roughly grouped under the categories of Theravāda, Mahāyāna, and Vajrayāna. Theravāda and Mahāyāna share common methods as sutric schools, while Vajrayāna can be seen as a tantric school.

The initial split between Sthaviravāda and Mahāsaṃghika occurred about 100 years after Buddha‘s death, due to differing views concerning the rigidity of monastic rules.

Influence of the early schools on later schools in other countries:
The following later schools used the Vinaya of the Dharmaguptaka:

Other influences on later schools:

The different schools in Theravada often emphasize different aspects (or parts) of the Pali Canon and the later commentaries, or differ in the focus on (and recommended way of) practice. There are also significant differences in strictness or interpretation of the Vinaya.

see also: VajrayānaSubcategorised according to predecessors