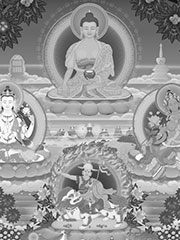 The Kadampa (Bka’-gdams-pa) Tradition was a Tibetan Mahayana Buddhist school. The disciple of the great Indian Buddhist Master Atisha (982 — 1054) Dromtönpa — a Tibetan lay master — founded it and passed three lineages to his disciples. The Kadampas were quite famous and respected for their proper and earnest Dharma practice. The most evident teachings of that tradition were the teachings on Bodichitta (later these special presentations became known as Lojong (Blo-ljong)) and Lamrim (Stages of the Path) by Atisha.

Tsongkhapa (Btsong-ka-pa) a reformer, collected all the three Kadampa lineages and integrated them, along with Sakya, Kagyu and other teachings, into his presentation of the Doctrine. The pervasive influence of Tsongkhapa was such that the Kadampas that followed were known as «New Kadampas» (Tib. Sarma Kadampa) or, more commonly, as the Gelug school, while those who preceded him became retroactively known as «Old Kadampas,» or simply as «Kadampas.»

After the death of Atisha (1054) his main disciple Lama Dromtonpa (Drom-tön Gyal-we Jungne, 1005 — 1054) organized his transmissions into the legacy known as «The Four Divinities and Three Dharmas» — a tradition whereby an individual practitioner could perceive all doctrines of the sutras and tantras as non-contradictory and could personally apply them all as complementary methods for the accomplishment of enlightenment. Eventually this lineage came to be known as Atisha’s Kadam Tradition, the Marvellous Legacy of Seven Divine Dharmas.

Six quintessential texts were used to elucidate the nature of the bodhisattva’s vast activities: The Bodhisattva Stages (Skt. Bodhisattvabhumi) by Asanga; An Ornament of the Mahayana Sutras (Skt. Mahayanasutraalamkara) by Maitreya/Asanga; A Compendium of Bodhisattva Trainings (Skt. Shikshasamucchaya) by Shantideva; A Guide to the Bodhisattva Way (Skt. Bodhisattvacharyaavatara) by Shantideva; A Garland of Birth Stories (Skt. Jatakamala) by Aryasura, and The Collected Sayings of the Buddha (Skt. Udanavarga) — the Tibetan Dhammapada by Dharmatrata. It is the tradition to read at the Great Prayer Festival (Mönlam) the fifth of these, A Garland of Birth Stories, during the morning session.

These were the principal scriptures studied in the Old Kadam School.As for the oral transmission teachings, these emanated from and were the essential practices taught in the five scriptures mentioned above. These oral tradition teachings are generally known as «The Instructions for Training the Mind in the Mahayana Tradition» (Tib., Theg-chen-blo-sbyong-gi-gdampa-pa).Atisha had collected these Lojong Teachings from his three principal Indian gurus (from his Master Dharmakirti (also known as Serlingpa or Suvarnadvipa), Guru Dharmarakshita and Yogi Maitreya) and later he secretly transmitted them to his main disciple, Lama Dromtonpa.

During the time of The Three Noble Kadampa Brothers many of these oral teachings were collected together and compiled into the text Stages of the Doctrine (Lamrim; tib.: sTan-rim). Yet at the time the lineages from Atisha’s Indonesian master Serlingpa (the Lojong — Teachings on how to train in Bodhichitta) were still kept secret.

The Kadam Tradition has mainly emphasised the Sutra Path (The Union of Compassion and Wisdom). The Kadampa Lineage is also summarized by «The Teachings Of The Four Divinities and Three Dharmas That Adorn The Body», «The Three Containers That Adorn The Speech» and «The Three Disciplines That Adorn The Consciousness».

In the 1990s, Geshe Kelsang Gyatso (Dge-shes Bskal-bzang Rgya-mtsho), a monk trained at Sera Monastery, a Gelug university, founded a new western organisation which he named the «New Kadampa Tradition.» The NKT claims to follow the Kadampa tradition, but many Tibetan Buddhists dispute this contention; please see New Kadampa Tradition for further discussion.