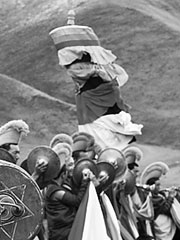 The Jonang or Jonangpa school of Tibetan Buddhism was founded in the early 14th century by Sherab Gyeltsen, a monk trained in the Sakyapa school. The Jonangpa school was widely thought to have become extinct in the late 17th century at the hands of the Fifth Dalai Lama who forcibly annexed the Jonangpa monasteries to his Gelugpa school. Recently, however, researchers were surprised to discover that some remote Jonangpa monasteries escaped this fate and have continued practicing uninterrupted to this day. As many as 5000 monks may be members of the remnant Jonangpa school practicing in areas at the edge of historic Gelugpa influence.

In the early 14th century the monk Sherab Gyeltsen broke away from the Sakyapa school and established the Jonangpa school at Jonang, about 160 km northwest of the Tashilhunpo monastery in Shigatse. There, the Jonangpa built a large monastery and constructed a printing press.

Some monasteries, that exist to this day, are considered to be Gelugpa — but given the ban upon the school of Jonang, none of them can be accepted to be wholely Gelugpa (in origin), as the Jonangpas were originally one of the Sakya branch-sects. These present monasteries are thus mainly, either Gelugpa-converted monasteries, no longer linked by tradition to Sakya (being banned by the Gelugs), or else disconnected from either Gelug or Sakya (by isolation or else modern, anti-Dalai Lama propaganda-influence.).

Sakya’s main sects are it’s majority branch of Ngor, the smaller branch of Tsar, the small branch of Sakya itself (the royal branch of it’s head-lamas, consisting mainly of it’s sole royal palace-temple and monastery.), Bodong and Jonang.

While the Gelugpa embraced the Jonangpa teaching on the Kalachakra, they ultimately opposed the Jonangpa for another set of teachings. Dolpopa Sherab Gyeltsen (1292-1361), the founder of the Jonangpa, and subsequent lamas had developed a teaching known as Shentong, which is closely tied to the Indian Yogacara school and held that the external world is completely empty. The Gelugpa school held the distinct but related Rangtong view. The Jonangpa interpreted Shentong to imply that there is a value in inaction and non-striving, which is associated with the teachings of medieval Chan Buddhism in China (which also gave rise to Zen Buddhism in Japan). This association with Chinese Buddhism tainted the Jonangpa in the eyes of the Gelugpa who considered the true teachings to derive from the Indian saints, particularly Atisha. An additional motivation in criticizing the Jonangpa sect as Zen-followers was that it enabled the Gelugpa to lay claim to the high moral ground previously held only by the rival Nyingmapa sect who were proud of their ancient and unsullied transmission from the Indian saints (and being sullied by later transmissions as were the Sakyapa, Kagyupa, and Gelugpa).

Modern historians have identified two other reasons which likely led the Gelugpa to suppress the Jonangpa:

First, the Jonangpa taught that large gifts of property to monasteries did not help one achieve enlightenment. This undercut the financial practices of the Gelugpa who were growing rapidly through exactly those means at the time.

Second, and more significantly, the Jonangpa had political ties that were very vexing to the Gelugpa. The Jonangpa, along with the Kagyupa, were historical allies with the powerful house of Tsang which was vying with the Dalai Lama and his Gelugpa school for control of central Tibet. This was bad enough, but soon after the death of Taranatha an even more ominous event occurred: Taranatha’s reincarnation was discovered to be a young boy named Zanabazar the son of Prince Tosiyetu Khan, ruler of the Khan Uula district of Outer Mongolia. Tosiyetu and his son were of Khalkha lineage, meaning they had the birth authority to become Khan. When the young boy was declared the spiritual leader of all of Mongolia, suddenly the Gelugpa were faced with the possibility of war with the former military superpower of Asia. While the Mongol Empire was long past its zenith, this was nonetheless a frightening prospect and the Dalai Lama sought the first possible moment of Mongol distraction to take control of the Jonangpa monasteries.

Current status and rediscovery by the outside world

In accordance with the observation that «victors write history» the Jonangpa were until recently thought to be an extinct heretical sect. Thus, Tibetologists were astonished when fieldwork turned up several active Jonangpa monasteries, including the main monastery called Tsangwa located in Dzamthang County, Sichuan, China. Almost 40 monasteries, comprising about 5000 monks, have been subsequently been found, including some in the Amdo and Gyarong districts of Qinghai and the Tibet Autonomous Region. Presumably these remnant survived because they were far from the Gelugpa capital at Lhasa and closer to sympathetic powers in Qing Dynasty China.

Interestingly, one of the primary supporters of the Jonang lineage in exile has been the 14th Dalai Lama of the Gelugpa. The Dalai Lama donated buildings in Himachal Pradesh state in India for use as a Jonang monastery and has visited there during one of His recent teaching tours. The Karmapa of the Karma Kagyu lineage has visited there as well.

The Jonang tradition has recently officially registered with the Tibetan Government in exile to be recognized as the fifth living Buddhist tradition of Tibet.