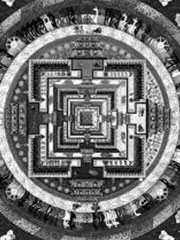 The Kalachakra tradition revolves around the concept of time and cycles: from the cycles of the planets, to the cycles of human breathing, it teaches the practice of controlling the most subtle energies within one’s body on the path to enlightenment. The Kalachakra deity represents a Buddha and thus omniscience. Since the Buddha is time and everything is under the influence of time, the Buddha therefore knows all. Similarly, the wheel is without beginning or end.

The Kalachakra Tantra is divided into five chapters, the first two of which are considered the “ground Kalachakra.” The first chapter deals with what is called the “outer Kalachakra”—the physical world, in particular the calculation system for the Kalachakra calendar. It also explicates the basic symbolism of the Kalachakra system

The second chapter deals with the “inner Kalachakra,” and concerns processes of human gestation and birth, the classification of the functions within the human body and experience, and the vajra-kaya—the expression of human physical existence in terms of channels, winds, drops and so forth. Human experience is described as consisting of four mind states: waking, dream, deep sleep, and a fourth state, the experience of sexual orgasm. The potentials (drops) which give rise to these states are described, together with the processes that flow from them.

The last three chapters describe the “other Kalachakra,” and deal with the path and fruition. The third chapter deals with the preparation for the meditation practices of the system, the initiations of Kalachakra. The fourth chapter explains the actual meditation practices themselves, both the meditation on the mandala and deity of Kalachakra in the generation process, and the perfection process of the Six Yogas. The fifth and final chapter describes the state of enlightenment that results from the practice.

The phrase «as it is outside, so it is within the body» is often found in the Kalachakra tantra to emphasize the similarities between human beings and the cosmos; This concept is the basis for Kalachakra astrology, but also for even more profound connections and interdependence as taught in the Kalachakra literature.

In Tibet, the Kalachakra astrological system is one of the main building blocks in the composition of Tibetan astrological calendars. The astrology in the Kalachakra is not unlike the Western system, in which complicated calculations are required to determine, for example, the exact location of the planets.

According to the Kalachakra legend, King Suchandra (Tib. Dawa Sangpo) of the northeastern Indian Kingdom of Shambhala requested teaching from the Buddha that would allow him to practice the dharma without renouncing his worldly enjoyments and responsibilities. In response to his request, the Buddha gave the first Kālachakra root tantra in Dhanyakataka (present day Amravati), a small town in Andhra Pradesh in southeastern India, supposedly emanating at the same time he was also delivering the Prajna Paramita sutras at Vulture Peak Mountain. Along with King Suchandra, ninety-six minor kings and emissaries from Shambhala were also said to have received the teachings. The Kalachakra thus passed directly to the Shambhala, where it was held exclusively for hundreds of years. Later Shambhalian kings, Manjushrikirti and Pundarika, are said to have condensed and simplified the teachings into the «Sri Kalachakra» and commentaries, all of which remain extant today as the heart of the Kalachakra.

There are presently two main traditions of Kalachakra, the Ra lineage (Tib. Rva-lugs) and the Dro lineage (Tib.’Bro-lugs). Although there were many translations of the Kalachakra texts from Sanskrit into Tibetan, the Ra and Dro translations are considered to be the most reliable (more about the two lineages below). The two lineages offer slightly differing accounts of how the Kalachakra teachings returned to India from Shambhala.

In both traditions, the Kalachakra and its related commentaries (sometimes referred to as the Bodhisattvas Corpus) returned to India during in 966 AD by an Indian Pandita. In the Ra tradition this figure is known as Chilupa, and in the Dro tradition as Kalachakrapada the Greater. Scholars such as Helmut Hoffman have suggested they are the same person. The first masters of the tradition disguised themselves with pseudonyms, so the Indian oral traditions recorded by the Tibetans contain a mass of contradictions.

Chilupa/Kalachakrapada is said to have set out to receive the Kalachakra teachings in Shambhala, along the journey to which he encounters the Kulika king Durjaya manifesting as Manjushri, who conferred the Kalachakra initiation on him based on his pure motivation.

Upon returning to India, Chilupa/Kalachakrapada is said to have defeated in debate Nadapada (Tib. Naropa), the abbot of Nalanda University, a great center of Buddhist thought at that time. Chilupa/Kalachakrapada then initiated Nadapada (who became known as Kalachakrapada the Lesser) into the Kalachakra, and the tradition as it was known thereafter in India and Tibet stemmed from these two. Nadapada established the teachings as legitimate in the eyes of the Nalanda community, and initiated into the Kālachakra such masters as Atisha (who, in turn, initiated the Kālachakra master Pindo Acharya (Tib. Pitopa)).

The Kalachakra tradition, along with all Vajrayana Buddhism, vanished from India in the wake of the Muslim invasions.

The Dro lineage was established in Tibet by a Kashmiri disciple of Nalandapa named Pandita Somanatha, who traveled to Tibet in 1027 (or 1064 AD, depending on the calendar used), and his translator Droton Sherab Drak Lotsawa, from which it takes its name. The Ra lineage was brought to Tibet by another Kashmiri disciple of Nadapada named Samantashri, and translated by Ra Choerab Lotsawa (or Ra Dorje Drakpa). The Ra lineage became particularly important in the Sakya order of Tibetan Buddhism, where it was held by such prominent masters as Sakya Pandita (1182-1251), Drogon Chogyal Pagpa (1235-1280), Budon Rinchendrup (1290-1364), and Dolpopa Sherab Gyaltsen (1292-1361). The later two, both of whom also held the Dro lineage, are particularly well known expositors of the Kalachakra in Tibet, the practice of which is said to have greatly informed Dolpopa’s exposition of the Shentong view. A strong emphasis on Kalachakra practice, along with exposition of the Shentong view, were the principle distinguishing characteristics of the Jonang school that Dolpopa founded.

The teaching of the Kalachakra was further advanced by the great Jonang scholar Taranatha (1575-1634). In the 17th century, the Gelug-led government of Tibet outlawed the Jonang school, closing down or forcibly converting most of its monasteries. The writings of Dolpopa, Taranatha, and other prominent scholars were banned. Ironically, it was also at this time that the Gelug lineage absorbed much of its Kalachakra tradition from the Jonang.

Taranatha and the Jonangs’ banning has been explained as that of a heretical sect and/or due to political strife among schools (see article Jonang), but it’s rather due to Taranatha’s contesting the scholarship of the Tibetans of his time.

About the contemporaneous scholars of his time, he  : «even the learned chroniclers and historians, when they came to discuss India, exhibited with their best efforts merely their poverty, like petty traders exhibiting their meagre stock».

The ban on him lost much of his wisdom and what he had to say, but it deepens the mystery surrounding Kalachakra, because it is prophecied to reveal it’s hidden nature in our modern times. That hidden revelation of it’s origin is verily this subject : about Taranatha.

The mystery is that Taranatha is dismissive of the scholarship of all Tibetans of his time, and as he is the main lineage holder of Kalachakra, he is dismissive of whatever Tibetans of his time passed down on it. The great potential for Kalachakra to progress is thus in the revealing of Taranatha’s secret and hidden meaning in his little-studied works such as which speaks with an obscure language that is difficult to fathom, throwing back to the arcane habit of Tantrism which uses a coded language called.

Taranatha is considered to be Tibet’s

Today Kalachakra is practiced by all four Tibetan schools of Buddhism, although it appears most prominently in the Gelug lineage. It is also remains very important to the Jonang school, which persists to this day despite the surpression, with a small number of monasteries in eastern Tibet. Khenpo Kunga Sherab Rinpoche is one contemporary Jonangpa master of Kalachakra.

Buton had considerable influence on the later development of the Gelug and Sakya traditions of Kalachakra, and Dolpopa on the development of the Jonang tradition on which the Kagyu and Nyingma draw. The Kagyu and Nyingma rely heavily on the extensive, Jonang-influenced Kalachakra commentaries of Ju Mipham and Jamgon Kongtrul the Great, both of whom took a strong interest in the tradition.

It should be noted, however, that there were many other influences and much cross-fertilization between the different traditions, and indeed His Holiness the Dalai Lama has asserted that it is acceptable for those initiated in one Kalachakra tradition to practice in others.

The Dalai Lamas have had specific interest in the Kālachakra practice, particularly the First, Second, Seventh, Eighth, and the current (Fourteenth) Dalai Lamas. The present Dalai Lama has given thirty Kalachakra initiations all over the world, and is the most prominent Kalachakra lineage holder alive today. Billed as the “Kalachakra for World Peace,” they draw tens of thousands of people. Generally, it is unusual for such advanced teachings to be given to large public assemblages, but the Kalachakra has long been an exception. The initiation is received as a blessing for the vast majority of those attending, although many attendees do subsequently engage in the practice as well.

The Kalachakra tradition practiced in the Karma and Shangpa Kagyu schools is derived from the Jonang tradition , and was largely systematized by Jamgon Kongtrul the Great, who wrote the text that is now used for empowerment. The Second and The Third Jamgon Kongtrul Rinpoche (1954-1992) were also prominent Kalachakra lineage holders.

The chief Kalachakra lineage holder for the Kagyu lineage was Ven. Kalu Rinpoche (1905-1990), who gave the initiation in the United States in 1982 in Boulder, Colorado. Upon his death, this mantle was assumed by his heart son the Ven. Bokar Rinpoche (1940 — 2004), who in turn passed it on to Ven. Khenpo Lodro Donyo Rinpoche. Bokar Monastery, of which Donyo Rinpoche is now the head, features a Kalachakra stupa and is a prominent retreat center for Kalachakra practice in the Kagyu lineage. Ven. Tenga Rinpoche is also a prominent Kagyu holder of the Kālachakra; he gave the initiation in Grabnik, Poland in August, 2005. Chogyam Trungpa Rinpoche, while not a noted Kalachakra master, became increasingly involved later in his life with what he termed Shambhala teachings, derived from the Kalachakra tradition, in particular, the mind terma which he claimed to have received from the Kulikas.

His Holiness Sakya Trizin, the present head of the Sakya lineage, has given the Kalachakra initiation many times and is a recognized master of the practice.

The Kalachakra Tantra has occasionally been the center of controversy because the text contains passages which are sometimes seen as demonizing the Abrahamic religions, particularly Islam. Further, it contains the prophecy of a future holy war between Buddhists and so-called «barbarians» (Skt. mleccha), which is sometimes interpreted as encouraging inter-religious conflict. An alternate intepretion takes the description of «holy war» less literally, believing that it refers to the inner battle of the religious practitioner against inner demonic and barbarian tendencies.