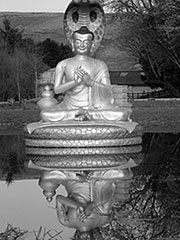 The Prajñaptivāda (Conceptualist) school of Buddhism split from Golulikas in late third century BCE. The Prajñaptivādins were early articulators of the two truths doctrine that is so important to Mahāyāna Buddhism, where it is usually found in the tension between upāya and prajñā. The Prajñaptivādins distinguished between saṃvTemplate:Rti (conventional) and paramārtha (ultimate) truth, and between tattva dharmas (real phenomena) and prañapti ones (mere concepts). They grouped the senses and their objects, along with basic elements, as mere concepts, while identifying the skandhas and suffering as real.