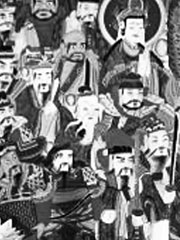 Hwaeom is the name of the Korean transmission of the Huayan school of Chinese Buddhism.

The greatest lasting impact of the Huayan school was to be seen in Korea, where it was transmitted by Uisang 義湘, who had been, along with Fazang, a student of Zhiyan. After Uisang returned to Korea in 671, he worked vigorously toward the establishment of the Hwaeom school on the peninsula. In this effort, he was greatly aided by the powerful influences of his friend Weonhyo 元曉, who although not an official representative of the school, relied deeply on Hwaeom metaphysical principles to establish his concept of interpenetrated Buddhism 通佛教. After the passing of these two early monks, the Hwaeom school became strongly established under the influence of a long series of Hwaeom masters. The Hwaeom school remained in the position of predominant doctrinal school in Korea up till the end of the Goryeo period, when it was placed into a forced merger with the Seon school 禪宗. Within the Seon school, Hwaeom thought would continue to play a strong role, and continues as such to modern times.