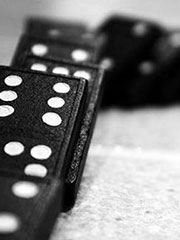 The doctrine of Pratitya-samutpada (Sanskrit: pratītya-samutpāda, Pali: paticca samuppada Tibetan: rten cing ‘brel bar ‘byung ba) is Buddhism’s primary contribution to metaphysics. Common to all Schools of Buddhism, it states that phenomena arise together in a mutually interdependent web of cause and effect. It is variously rendered into English as «dependent origination,» «conditioned genesis,» «dependent co-arising,» «interdependent arising,» etc.

The enlightenment (Bodhi) of the Buddha Gautama was simultaneously his liberation from suffering and his insight into the nature of the universe – particularly the nature of the lives of ‘sentient beings’ (principally humans and animals). What the Buddha awakened to (Bodhi means ‘to awaken’) was the truth of dependent origination. This is the understanding that any phenomenon ‘exists’ only because of the ‘existence’ of other phenomena in an incredibly complex web of cause and effect covering time past, time present and time future. Because all things are thus conditioned and transient (anicca), they have no real independent identity (anatta) so do not truly ‘exist’, though to ordinary deluded minds this appears to be the case. All phenomena are thus fundamentally insubstantial and ‘empty’ (sunya). Wise human beings, who ‘see things as they are’ (yatha-bhuta-ñana-dassana), renounce attachment and clinging, transform the energy of desire into awareness and understanding, and eventually transcend the conditioned realm of form becoming Buddhas or Arahants.

The abiding of an awakened sage is not ‘in the world’ as such but has its root and ground in the ‘unconditioned element’, ie. Nibbana (cf. ‘The foxes have holes, and the birds of the air have nests; but the son of man has nowhere to lay his head’. Matt 8:20). After his enlightenment, the Buddha Gautama referred to himself as the Tathāgata meaning ‘one who comes from «thusness»‘ or ‘the one thus gone’ highlighting the ambiguous ontological status of one whose center of being is in the unconditioned realm. The Buddha called it Amarāvatī or ‘the abode of the deathless’.(cf. the expression ‘eternal life’ or ‘everlasting life’ used in the gospels).

With respect to the destinies of human beings and animals, dependent origination has a more specific meaning as it describes the process by which such sentient beings incarnate into any given realm and pursue their various worldly projects and activities with all the concomitant suffering involved. Among these sufferings are ageing and death. Ageing and death are experienced by us because birth and youth have been experienced. Without birth there is no death. One conditions the other in a mutually dependent relationship. Our becoming in the world, the process of what we call ‘life’, is conditioned by the attachment and clinging to certain ideas and projects such as having a family or making money. This attachment and clinging in turn cannot exist without craving as its condition. The Buddha understood that craving comes into being because there is sensation in the body which we experience as pleasant, unpleasant or neutral. When we crave certain things such as alcohol, sex or sweet foods it is the sensation induced by contact with the desired object that we crave rather than the object itself. Sensation is caused by contact with such objects of the senses. The contact or impression made upon the senses (manifesting as sensation) is itself dependent upon the six sense organs which themselves are dependent upon a psycho-physical entity such that a human being is. The whole process is summarised by the Buddha as follows:

The thrust of the formula is such that when certain conditions are present, they give rise to subsequent conditions, which in turn give rise to other conditions and the cylical nature of life in Samsara can be seen. This is graphically illustrated in the Wheel of Life (Bhavacakra).

There appears to be widespread misunderstanding of the formula in relation to time scales. Many references made to Pratitya-samutpada are expressed over lifetimes. While this is true in the wider sense, more practically, this is to be seen as a daily cycle occurring from moment-to-moment throughout each day.

Pratitya-samutpada is one part of a group of Buddhist doctrines that work together to bring an end to suffering (duhkha) and the release from Samsara. These are:

Its necessary to refer to the above in order to fully understand and make use of Pratitya-samutpada.

For example, Avidya the first condition, its necessary to refer to Three Signs of Being for a fuller explanation and a better understanding of its fit and function within Pratitya-samutpada. Its also necessary to understand the Three Fires and how they fit in the scheme of things. A quick glance at the Wheel of Life (Bhavacakra), you will note that the Three Fires sit at the very centre, of the schemata, and drive the whole edifice.

A general formulation of this concept goes:

An example to illustrate:

You go on summer holiday to a hot climate, such as Arizona, Spain or Australia. It’s a hot clear day and you’re sunbathing by the hotel pool with the sun beating down on you. You will begin to feel hot, sweaty, uncomfortable, and soon feel thirsty. You go get yourself a drink to quench your thirst, and think «It’s too hot to sit by the pool today, I’m going back to my hotel room where it’s cooler, to read for a while».

This draws attention to the constant flux of «Coming to be, and Ceasing to be» that is happening all the time. All phenomena are subject to this unending interaction. And since all phenomena are dependent on other phenomena, they are all transient and impermanent.

The first application is to suffering, and is known as the Four Noble Truths:

The other application is to the rebirth process and is known as the Twelve Nidanas or the Twelve Links of Conditioned Existence. In this application of pratitya-samutpada, each link is conditioned by the preceding one, and itself conditions the succeeding one. These cover three lives:

To understand this, it is necessary to study different sorts of conditions, because only one of them is called «causal condition». Per exemple, ignorance can determine activities as an «object condition» if one.. decide to reduce ignorance.
And then because in this life one has been ignorant, and acted in such a way as to produce karma, the cycle continues round again.

Nibbana (Skt Nirvana) is often conceived of as stopping this cycle. By removing the causes for craving, craving ceases. So with the ceasing of birth, death ceases. With the ceasing of becoming, birth ceases.. and so on until with the ceasing of ignorance no karma is produced, and the whole process of death and rebirth ceases. In fact the opportunity for change comes between the stages of sensation and desire, since as we saw above it is craving that drives the whole process. If one can simply experience sensations without desiring, then craving will not arise, and one can begin to be free from the cycle of birth and death.

Though the formulations above appear might seem to imply that pratitya-samutpada is a straightforward causal model, in the hands of the Madhyamaka school, Pratitya-samutpada is used to demonstrate the very lack of inherent causality, in a manner that appears somewhat similar to the ideas of David Hume.

The conclusion of the Mādhyamikas is that causation, like being, must be regarded as a merely conventional truth (saṃvṛti), and that to take it as really (or essentially) existing would be both a logical error and a perceptual one, arising from ignorance and a lack of spiritual insight.

According to the analysis of Nāgārjuna, the most prominent Mādhyamika, true causality depends upon the intrinsic existence of the elements of the causal process (causes and effects), which would violate the principle of anatta, but pratītya-samutpāda does not imply that the apparent participants in arising are essentially real.

Because of the interdependence of causes and effects (i.e. causes depend on their effects in order to be causes, and effects likewise depend on their causes in order to be effects), it is quite meaningless to talk about them as existing separately. However, the strict identity of cause and effect is also refuted, since if the effect were the cause, the process of origination could not have occurred. Thus both monistic and a dualistic accounts of causation are rejected.

In his Entry to the middle way, Candrakirti asserts, «If a cause produces its requisite effect, then, on that very account, it is a cause. If no effect is produced, then, in the absence of that, the cause does not exist.»

The reversibility of dependent arising

Pratitya-samutpada is most commonly used to explain how suffering arises depending on certain conditions, the implication being that if one or more of the conditions are removed (if the «chain» is broken), suffering will cease.

There is also a text, the in the Samyutta Nikaya, in which a discussion of the conditions not for suffering but for enlightenment are given. This is sometimes glossed as «transcendental» dependent arising. The chain in this case is: