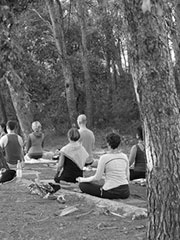 Vijñāna is Sanskrit for consciousness. This page considers the Buddhist concept.

Specifically, a vijnana is a single moment of conceptual consciousness. It has two components: the awareness itself, and the object of that awareness (which might be a perception, a feeling etc.). Normal mental activity is considered to consist of a continual succession of vijnanas. Vijnana is contrasted with jnana, or pure awareness free of conceptual constructs.

Vijnana as an aggregate

Vijnana is one of the five aggregates, khanda, associated with rupa, vedana, sanna and sankhata: body, feeling, perception and mental activities. All of the aggregates are to be seen as empty of self-nature; that is, they arise dependent on causes and conditions. The cause for the arising of a vijnana is the object of awareness.

Most of buddhist schools consider six vijnana, but some describe more.

Nevertheless, these vijnana are not considered as «ultimate phenomenoms» as they gather mental factorrs, caitasika. One example : the first dhyana, a meditative state, is described as based on five ultimate mental factors : vitaka, civara, piti (rapture), sukkha (serenity) and ekkagata (or stability of the mind).

The amalavijana is considered by some Yogacara’s schools as a ninth consciousness. It is the pure state associated with the nirvana. But some schools considers the amalavijnana to be the pure aspect of the alayavijnana.