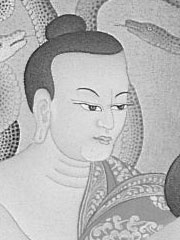 Nāgārjuna (నాగార్జునా in Telugu, 龍樹 in Chinese) (c. 150 — 250 CE) was an Indian philosopher, the founder of the Madhyamaka (Middle Path) school of Mahāyāna Buddhism, and arguably the most influential Indian Buddhist thinker after the Gautama Buddha himself.

His writings were the basis for the formation of the Madhyamaka (Middle Way) school, which was transmitted to China under the name of the Three Treatise (Sanlun) School. He is credited with developing the philosophy of the Prajnaparamita sutras, and was closely associated with the Buddhist university of Nalanda.

Very few details on the life of Nāgārjuna are known, although many legends exist. He may have been born in South India, probably near the town of Nagarjunakonda in present day Andhra Pradesh. According to traditional biographers and historians such as Kumarajiva(鳩摩羅什), he was born into a Brahmin family, but later converted to Buddhism. This may be the reason he was one of the earliest significant Buddhist thinkers to write in Sanskrit rather than Pāli or Buddhist Hybrid Sanskrit.

From studying his writings, it is clear that Nāgārjuna was conversant with the Nikaya school philosophies and with the emerging Mahāyāna tradition. If the most commonly accepted attribution of texts (that of Christian Lindtner) holds, then he was clearly a Māhayānist, but his philosophy holds assiduously to the canon, and while he does make explicit references to Mahāyāna texts, he is always careful to stay within the parameters set out by the canon.

There exist a number of influential texts attributed to Nāgārjuna, although most were probably written by later authors. The only work that all scholars agree is Nagarjuna’s is the Mūlamadhyamakakārikā (Fundamental Verses on the Middle Way), which contains the essentials of his thought in twenty-seven short chapters. According to Lindtner the works definitely written by Nagarjuna are:

There are other works attributed to Nāgārjuna, some of which may be genuine and some not. In particular, several important works of esoteric Buddhism (most notably the Pañcakrama or «Five Stages») are attributed to Nāgārjuna and his disciples. Contemporary research suggests that these works are datable to a significantly later period in Buddhist history (late eighth or early ninth century), but the tradition of which they are a part maintains that they are the work of the Madhyamaka Nāgārjuna and his school. Traditional historians (for example, the 17th century Tibetan Tāranātha), aware of the chronological difficulties involved, account for the anachronism via a variety of theories, such as the propagation of later writings via mystical revelation. A useful summary of this tradition, its literature, and historiography may be found in Wedemeyer 2006.

Nāgārjuna’s primary contribution to Buddhist philosophy is in the development of the concept of śūnyatā, or «emptiness,» which brings together other key Buddhist doctrines, particularly anatta and pratītyasamutpāda (dependent origination). For Nāgārjuna, it is not merely humans that are empty of ātman; all things are without any svabhāva, literally «own-nature» or «self-nature», and thus without any underlying essence; they are empty of being. This is so because they are arisen dependently: not by their own power, but by depending on conditions leading to their coming into existence, as opposed to being. Nāgārjuna was also instrumental in the development of the two-truths doctrine, which claims that there are two levels of truth in Buddhist teaching, one which is directly true, and one which is only conventionally or instrumentally true, commonly called upāya in later Mahāyāna writings. Nāgārjuna drew on an early version of this doctrine found in the Kaccāyanagotta Sutta, which distinguishes nītārtha (clear) and neyārtha (obscure) terms —

Nāgārjuna differentiates between saṃvṛti (conventional) and paramārtha (ultimately true) teachings, but he seldom declares any to fall in this latter category; for him, even śūnyatā is śūnya—even emptiness is empty. For him, ultimately,

The designable is ceased when the range of thought is ceased,
For phenomenality is like nirvana, unarisen and unstopped.