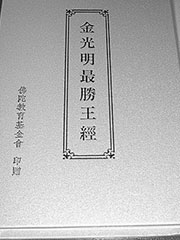 The Golden Light Sutra (金光明經; Chinese: jin1 guang1 ming2 jing1; Japanese: Konkōmyō Kyō), an important Buddhist text, was originally written in India (Sanskrit romanization: Suvarnaprabhasa-sutra), and was translated several times into Chinese. Now almost forgotten in China, it became one of the most important sutras in Japan because of its fundamental message, which teaches that the Four Guardian Gods (四天王) protect the ruler who governs his country in the proper manner. For this reason, it won great esteem as a sutra for protecting the country and often was read publicly to ward off threats. Its first reading as a court ceremony was around 660 AD, when the Tang Dynasty of China and Silla of Korea had defeated Baekche of Korea and were threatening Japan.