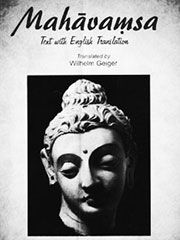 The Mahavansha, also Mahawansha, (Pāli: «great chronicle») is a historical record, written in the Pāli language, of the Buddhist kings as well as Dravidian kings of Sri Lanka. It covers the period from the coming of King Vijaya in 543 BC to the reign of King Mahasena (334 – 361).

A companion volume, the Choolavansha or Choolavansha («lesser chronicle»), compiled by Sinhala Buddhist monks, covers the period from the 4th century to the British takeover of Sri Lanka in 1815. The combined work, sometimes collectively referred to as the «Mahavansha», provides a continuous historical record of over two millennia.