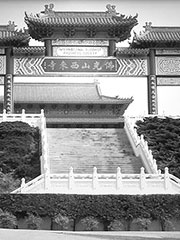 Hsi Lai Temple (Simplified Chinese: 西来寺; Traditional Chinese: 西來寺; Pinyin: Xīlái Sì) is a traditional Chinese Buddhist mountain monastery. It is located on the foothill region of Hacienda Heights, California, USA, a suburb of Los Angeles. The name «Hsi Lai» means Coming to the West, by which they mean the Buddha Dharma.

The temple is one of the first branch temples of Taiwan’s largest charity and religious organization, Fo Guang Shan, founded by Venerable Master Hsing Yun. This temple is also the site of the founding of Buddha’s Light International Association, which was established in 1991. The temple, like its main temple in Taiwan, follows the Rinzai Zen school of Buddhism, and also follows the Pure Land School.

The temple was also the site of the 16th General Conference of the World Fellowship of Buddhists.

In 1976, Master Hsing Yun represented a Buddhist group from Taiwan to participate in America’s bicentennial celebration. Many American friends asked Master Hsing Yun to build a monastery in the US. Therefore, Fo Guang Shan asked the Venerables Tzu Chuang (the first abbess of Hsi Lai Temple) and Yi Hung to plan and organize the construction of the temple in the Greater Los Angeles area. It was officially registered under the name of International Buddhist Progress Society. Until the temple was complete, Ven. Tzu Chuang bought an old church building, which was to be Hsi Lai’s temporary headquarters. The original temple was called Bai Ta (White Pagoda) Temple.

The building of the temple survived six public hearings and 165 explanatory sessions. The planning and construction of the temple, in the 1980s, were met with suspicion and resistance from local residents outside of the Asian/Buddhist community, many of whom knew little about Buddhism or had negative attitudes. In 1985, the temple was finally granted a building permit. The groundbreaking ceremony was held the following year, and was completed on November 26th, 1988.

The temple was finished at a cost of $10 million. Such negative feelings about the building of Hsi Lai have diminished as the general level of awareness has been raised and as the temple and its residents have proven to be good neighbors. In addition, when the temple opened, the Master blessed the land from the highest point on the property, and some believe that the blessing brings good fortune and will raise property values.

University of the West

In 1990, in conjuction to the completion of Hsi Lai Temple, Master Hsing Yun founded Hsi Lai University, one of sixteen Buddhist colleges and universities operated by Fo Guang Shan. The university was relocated in Rosemead, California in 1996. It is one of the first Buddhist colleges in the United States.

There are departments for Bachelor of Arts and Master of Arts in Buddhist studies, comparative religious studies, and a Master of Business Administration program is also offered.

In 2004, the university changed its name to the University of the West and appointed Lewis Lancaster, a religious professor at UC Berkeley and longtime member of Fo Guang Shan, as president.

Because of the temple’s beautiful surroundings and various facilities, Hsi Lai is a popular venue for tourists interested in knowing more about Chinese culture and Buddhism. Over the years since its foundation, Hsi Lai has been a favorable site for school field trips, business trips, organization meets, and a center for interreligious dialogue. The temple facilities have been utilized for over ten thousand occasions and group activities with favorable feedback.

Not only does Hsi Lai have workshops on Buddhism, the temple also holds workshops on a wide range of topics including taxation, legal issues, education, immigration, marriage, family discipline, etc. Invitied speakers are experts in their respective fields who are willing to share their knowledge for the benefit of others.

Regular Dharma functions are held weekly on Sunday morning, where they usually chant various sutras, such as the Diamond Sutra or the Amitabha Sutra, and meditation and Buddhism classes in both English and Chinese, are held on some days of the week. Monks who can speak a variety of languages besides Mandarin, primarily English and Cantonese, are available to perform weddings or funerals.

During this time, they also hold a ceremony known as Sangha Day, where devotees gather to honor the monastics by offering food to them, as well as offer a public cultural performance, performing classical and traditional Chinese music or elegant solo dances.

During the 1996 presidential campaign, Vice President Al Gore held a fundraiser at Hsi Lai Temple. The temple fundraising luncheon attended by Gore was implicated in a campaign donation laundering scheme.

In that scheme, donations nominally from Master Hsing Yun and two Buddhist nuns, Venerables Man Ho and Yi Chi, in lawful amounts had actually been donated by wealthy monastics and devotees.

Critics noted that the nuns, who each supposedly gave $1000 to the Clinton-Gore campaign, had actually taken monastic vows of poverty. Gore attempted to dodge the criticism by claiming ignorance, saying he «drank a lot of iced tea» at the function and, as a result, had made several trips to the bathroom. It was during these bathroom breaks, he claimed, that he missed the illegal activity. This was widely perceived as disingenuous and, by critics, as an outright lie designed to avoid the consequences of illegal fundraising.

In this context, Hsi Lai was often referred to in the media as simply «the Buddhist temple».

Venerables Man Ho and Yi Chi are currently still living at the temple, but remain elusive.

Disputes over the largest monastery in the Western Hemisphere

Since 1988, members of Hsi Lai and others have said that the temple is the largest temple in the western hemisphere. However, another temple, known as the City of Ten Thousand Buddhas situated in Talmage (a city in Northern California), has begun claiming they are larger. Since the city monastery has not gained a large worldwide presence like Hsi Lai has, this claim has been disputed.

Past Abbots and Abbesses of Hsi Lai