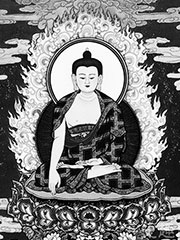 Bhaisajyaguru is described in the eponymous Bhaisajyaguru-sutra (Jp. 薬師経 Yakushi-kyō) as bodhisattva who made and fulfilled 12 vows, two of them related to healing. On achieving Buddhahood, he became the Buddha of the realm of Vaidūryanirbhāsa (Jp. 浄瑠璃 Jōruri) in the eastern quarter, where he is attended to by the bodhisattvas Nikko and Gakko. Yakushi is notably absent from the Mandala of the Two Realms, but is one of the Thirteen Buddhas.

Bhaisajyaguru is typically depicted seated, wearing monk’s robes, with a blue-colored jar of medicine in his left hand and the right hand resting on his right knee, holding the stem of the aurara plant between thumb and first finger.

Starting in the 7th century Yakushi has been the object of a popular cult in Japan, largely supplanting the previous cult of Ashuku (Akshobhya). Some of Yakushi’s role has been taken over by Jizo (Ksitigarbha), but Yakushi still presides over the Japanese Buddhist memorial service to dead.

The practice of Medicine Buddha, the Supreme Healer (or Sangye Menla in Tibetan) is not only a very powerful method for healing and increasing healing powers both for oneself and others, but also for overcoming the inner sickness of attachment, hatred, and ignorance, thus to meditate on the Medicine Buddha can help decrease physical and mental illness and suffering.

Tibetan Buddhists consider the Medicine Buddha Empowerment to be the most powerful blessing for healing, dispelling sickness and for awakening the innate healing wisdom that lies within every individual.

At the Shenpen Osel website (external links section) the very venerable Khenchen Thrangu Rinpoche gives a wonderful and detailed commentary on the Medicine Buddha. One will need to download «Acrobat Reader» program offered free at the site in order to use the PDF file. At their site click on Volume 4, Number 1 to download the commentaries and sadhana on the Medicine Buddha.

This is the long version of the Medicine Buddha Mantra in Sanskrit:

The Uses for the Medicine Buddha Mantras in Tibetan Buddhism