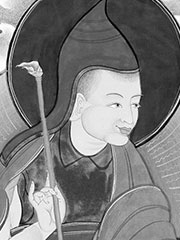 Dharmaraksita (Pali: Dhammarakkhita) was one of the missionaries sent by the Mauryan emperor Ashoka to proselytize the Buddhist faith. He is described as being a Greek (Pali: «Yona», lit. «Ionian») in the Mahavamsa, and his activities are indicative of the strength of the Hellenistic Greek involvement during the formative centuries of Buddhism.

Greek communities had been present in neighbouring Bactria and in nortwestern India since the time of the conquests of Alexander the Great around 323 BCE, and developed into the Greco-Bactrian and Indo-Greek kingdoms until the end of the 1st century BCE. Greeks were generally described in ancient times throughout the Classical world as «Yona», «Yonaka», «Yojanas» or «Yavanas», lit. “Ionians».

«Here in the king’s domain among the Greeks, the Kambojas, the Nabhakas, the Nabhapamkits, the Bhojas, the Pitinikas, the Andhras and the Palidas, everywhere people are following Beloved-of-the-Gods’ instructions in Dhamma.» Rock Edict Nb13 (S. Dhammika)

«Now it is conquest by Dhamma that Beloved-of-the-Gods considers to be the best conquest. And it (conquest by Dhamma) has been won here, on the borders, even six hundred yojanas away, where the Greek king Antiochos rules, beyond there where the four kings named Ptolemy, Antigonos, Magas and Alexander rule, likewise in the south among the Cholas, the Pandyas, and as far as Tamraparni.» Rock Edict Nb13 (S. Dhammika)

«When the thera Moggaliputta, the illuminator of the religion of the Conqueror, had brought the (third) council to an end (…) he sent forth theras, one here and one there:

The country of Aparantaka has been identified as the northwestern part of the Indian subcontinent, and comprises Northern Gujarat, Kathiawar, Kachch, and Sindh, the area where Greek communities were probably concentrated. To this day, a city in Gujarat is named Junagadh, originally «Yonagadh», lit. «City of the Greeks».

Dharmarashita is said to have preached the Aggikkhandopama Sutra, so that 37,000 people were converted in Aparantaka and that thousands of men and women entered the Order («pabbajja»):

«The thera Dhammarakkhita the Yona, being gone to Aparantaka and having preached in the midst of the people the Aggikkhandhopama-sutta gave to drink of the nectar of truth to thirty-seven thousand living beings who had come together there, lie who perfectly understood truth and untruth. A thousand men and yet more women went forth from noble families and received the pabbajja» (Mahavamsa XII, Dipavamsa.VIII.7)

In another Pali reference, a Buddhist monk from Sri Lanka named Punabbasukutumbikaputta Tissa Thera is said to have been to India in order to study with «the Yonaka Dhammarakkhita», whereupon he attained the «patisambhida» (analytical knowledge). (VibhA.389, Sammoha-Vinodaní, Vibhanga Commentary).

«And Assagutta said to him: ‘Do thou now go, Nâgasena, to Pâtaliputta. There, in the Asoka Park, dwells the venerable Dhammarakkhita. Under him you should learn the words of the Buddha.'» (Milinda Panha, I, 32)

«Nâgasena went on to the Asoka Park to Dhammarakkhita. And after saluting him, and telling him on what errand he had come, he learnt by heart, from the mouth of the venerable Dhammarakkhita, the whole of the three baskets of the Buddha’s word in three months, and after a single recital, so far as the letter (that is, knowing the words by heart) was concerned. And in three months more he mastered the spirit (that is, the deeper meaning of the sense of the words).

‘Though that be so, holy one, say no more,’ was the reply. And on that very day, at night, he attained to Arahatship and with it to the fourfold power of that Wisdom possessed by all Arahats (that is to say: the realisation of the sense, and the appreciation of the deep religious teaching contained in the word, the power of intuitive judgment, and the power of correct and ready exposition)». (Milinda Panha, I, 35)