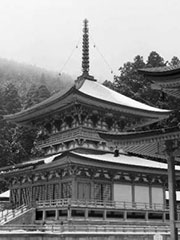 Tiantai (天台宗, Wade-Giles: T’ien T’ai) is one of the thirteen schools of Buddhism in China and Japan, also called the Lotus Sutra School because of its emphasis on the supremacy of that scripture. It was founded by Zhiyi (智顗, Wade-Giles: Chih-I) (538-597) during the Sui dynasty in China.

Tiantai is a Mahāyāna school established at Tiantai mountain. The official line of transmission lists the Indian scholar Nagarjuna and Chinese monks Huiwen and Huisi as Zhiyi’s predecessors, although modern scholars believe that Zhiyi was in fact the sect’s founder. The sixth patriarch, Jingqi helped popularized the sect through his commentaries on the writings of these three figures.

The development of the Tiantai school reflected a response to a growing challenge among Chinese Buddhists. Chinese pilgrims and translators had gathered and translated a huge body of Buddhist scruptures from India. Due to the vagaries of ancient travel and communications, these texts were often collected in a very eclectic- or even haphazard- manner. Collections of texts were often gathered from multiple schools of Buddhist philosophy. Incomplete collections were imported, without awareness that significant texts were missing. Texts separated by generations of philosophical development were lumped together as contemporaries. As more and more scriptures were made available, it became increasingly clear that many of these texts could not possibly be reconciled with one another. Chinese scholars wondered how the Buddha could have possibly taught all of these seemingly contradictory ideas- and more importantly, which practice or belief the Buddha had intended them to follow.

Zhiyi’s response was to organize all existing Nikaya and Mahayana sutras into five periods and eight types of teachings, comprising his view of the various levels of teaching revealed by the Buddha. Certain texts had been taught early in the Buddha’s career, when his followers were not ready to hear the ‘ultimate’ truth. These teachings (the Agamas) were an upaya, or skillful means, an example of the Buddha using his supernatural skill as a teacher to lead human beings towards the truth. Later teachings- which had been given to more advanced followers, or delivered to various divine beings (typically devas or Nagas)- represented a more complete and accuracte picture of the Buddha’s true teachings, and did away with some of the philosophical ‘crutches’ introduced for the benefit of the ignorant in earlier periods. Zhiyi’s schema culminated with the Lotus Sutra, which he held to be the supreme synthesis of Buddhist doctrine. The Lotus Sutra also suggested the classification system ultimately employed by Zhiyi- the Sutra held that followers of the Hinayana schools were actually just as much on the bodhisattva path as the followers of the Mahayana— they were just unable to rightly perceive their ultimate goal.

Tiantai thus became doctrinally broad, able to absorb and give rise to other movements within Buddhism. Zhiyi emphasized both scriptural study and practice, and taught the rapid attainment of Buddhahood through observing the mind. He also took up a principle of triple truth derived from Nagarjuna:

The transient world of phenomena is thus seen as one with the unchanging, undifferentiated ground of existence. This doctrine was elaborated in a complex cosmology of 3000 interpenetrating realms of existence.

Most scholars regard the Tiantai as the first truly Chinese school of Buddhist thought. The schools of Buddhism that had existed in China prior to the emergence of the Tiantai are generally believed to represent direct transplantations from India, with little modification to their basic doctrines and methods. The creation of the Tiantai school signified the maturation and integration of Buddhism in the Chinese context. No longer content to simply translate texts received from Indian sources, Chinese Buddhists began to apply new analyses to old texts, and even to produce new scriptures and commentaries that would attain significant status within the East Asian sphere. The Tiantai emphasis on the Lotus Sutra would be developed and expanded by the Japanese monk Nichiren, giving rise to Nichiren Buddhism— a school of Buddhism seen by some scholars as playing a similar role in Japan to that of the Tiantai school in China.