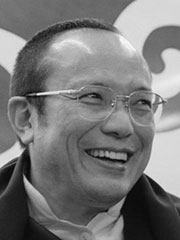 In Tibetan Buddhism the Tai Situpa is one of the lineages of tulkus, reincarnated lamas, in the Kagyu school. According to tradition, the Tai Situpa is an emanation of the bodhisattva Maitreya, who will become the next Buddha, and who has been incarnated as numerous Indian and Tibetan yogins since the time of the historical Buddha. The title Tai Situpa, or more completely Khentin Tai Situpa means «far-reaching, unshakable, great master, holder of the command». The holder of this title is also called Situ Rinpoche and Tai Situ.