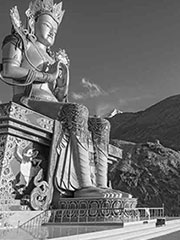 A monastery is the habitation of monks, derived from the Greek word for a hermit’s cell. Western Christian monasteries are also called abbey, priory, charterhouse, friary, and preceptory, while the habitation of nuns can also be called a convent.

The number of dedicated monastics in any religion has waxed and waned due to many factors. There have been Christian monasteries such as «The Cappadocian Caves» that used to shelter upwards of 50,000 monks, or St Pantelaimon’s on the «Holy Mountain» in Greece, which had 30,000 in its heyday. Today those numbers have dwindled considerably. Currently the monasteries containing the largest numbers are Buddhist: Drepung Monastery in Tibet housed around 15,000 monks prior to the Chinese invasion. Today its relocated monastery in India houses around 8,000 — nearly five times the current monastic population of the entire Holy Mountain.

On the other hand, there are those among monastic leaders that are critical of monasteries that are too large. Such become institutions and lose that intensity of spiritual training that can better be handled when an elder has only 2 or 3 disciples. There are on the Holy Mountain areas such as the Skete of St Anne, which could be considered one entity but is in fact many small «Sketes» (monastic houses containing one elder and 2 or 3 disciples) who come together in one church for services.

The communal life of a monastery is called cenobitic, as opposed to the anchoretic (or anchoritic) life of an hermit.

The word monastery comes from the Greek «monasterion», from the root «monos» = one, or alone (originally all Christian monks were hermits).

In England the word monasterium was also applied to the habitation of a bishop and the cathedral clergy who lived apart from the lay community. Most cathedrals were not monasteries, and were served by canons secular, who were communal but not monastic. However some were run by monastic orders, such as York Minster. Westminster Abbey was for a short time a cathedral, and was a Benedictine monastery until the Reformation, and its Chapter preserves elements of the Benedictine tradition. See the entry cathedral. They are also to be distinguished from collegiate churches, such as St George’s Chapel, Windsor.

For a discussion of the history and development of monasteries see monasticism and abbey.

Christian monasticism started in Egypt. According to tradition, in the third century St. Anthony was the first Christian to adopt this lifestyle. After a short while others followed. Originally, all Christian monks were anchorites (hermits) seldom encountering other people. But because of the extreme difficulty of the solitary life, many monks failed, either returning to their previous lives in the city, or becoming spiritually deluded.

A transitional form of monasticism was later created by Saint Amun in which “solitary” monks lived close enough to one another to offer mutual support as well as gathering together on Sundays for common services.

It was St. Pachomios who developed the idea of having monks live together and worship together under the same roof (Coenobitic Monasticism). Soon the Egyptian desert blossomed with monasteries, especially around Nitria, which was called the «Holy City”. Estimates are the upwards of 50,000 monks lived in this area at any one time.

Anchoritism never died out though, but was reserved only for those advanced monks who had worked out their problems within a cenobitic monastery.

The idea caught on, and other places followed:

In the Eastern Orthodox Church, monks and nuns follow a similar ascetic discipline. Unlike Roman Catholics, there is only one form of monasticism for the Orthodox. Monastics, male or female, live lives away from the world, in order to pray for the world. They do not run hospitals and orphanages, they do not teach or care for the sick; it is expected for lay people to do these things to work out their own salvation. Monasteries can be very large or very small. The largest monasteries can hold many thousands of monks and are called lavras. Small monasteries are often called “sketes” and usually only have one elder and 2 or 3 disciples. There are higher levels to ascetic practice but the monks who practice these do not live in monasteries, but alone. When monks live together, work together, and pray together, following the directions of the abbot and the elder monks, this is called a cenobium. The idea behind this is when you put many men together, like rocks with sharp edges, their “sharpness” becomes worn away and they become smooth and polished.

One of the great centers of Orthodox monasticism is the Holy Mountain (also called Mt. Athos) in Greece, an isolated, self-governing peninsula approximately 20 miles long and 5 miles wide (similar to the Vatican, being a separate government), administered by the heads of the 20 major monasteries, and dotted with hundreds of smaller monasteries, sketes, and hesicaterons. Even today the population of the Holy Mountain numbers in the tens of thousands of monastics (men only) and cannot be visited except by men with special permission granted by both the Greek government and the government of the Holy Mountain itself.

A number of distinct monastic orders developed within Roman Catholicism. Eastern Orthodoxy does not have a system of individual Orders, per se.

The Society of Jesus (Jesuits) is a religious order, having vows; but, it is not a monastic order, strictly speaking, as all its members live in the world.

Buddhist monasteries, known as vihara, emerged from the practice of vassa, the retreat undertaken by Buddhist monks and nuns during the South Asian rainy season. In order to prevent wandering monks from disturbing new plant growth or becoming stranded in inclement weather, Buddhist monks and nuns were instructed to remain in a fixed location for the roughly three month period typically beginning in mid-July. Outside of the vassa period, monks and nuns both lived a migratory existence, wandering from town to town begging for food. These early fixed vassa retreats were held in pavilions and parks that had been donated to the sangha by wealthy supporters. Over the years, the custom of staying on property held in common by the sangha as a whole during the vassa retreat evolved into a more cenobitic lifestyle, in which monks and nuns resided year round in monasteries. In India, Buddhist monasteries gradually developed into centers of learning where philosophical principles were developed and debated; this tradition is currently preserved by monastic universities of Vajrayana Buddhists, as well as religious schools and universities founded by religious orders across the Buddhist world. In modern times, living a settled life in a monastery setting has become the most common lifestyle for Buddhist monks and nuns across the globe.

Whereas early monasteries are considered to have been held in common by the entire sangha, in later years this tradition diverged in a number of countries. Despite vinaya prohibitions on possessing wealth, many monasteries became large land owners, much like monasteries in medieval Christian Europe. In China, peasant families worked monastic-owned land in exchange for paying a portion of their yearly crop to the monks resident in the monastery, just as they would to a feudal landlord. In Sri Lanka and Tibet, the ownership of a monastery often became vested in a single monk, who would often keep the property within the family by passing it on to a nephew who ordained as a monk. In Japan, where civil authorities required Buddhist monks to marry, being the head of a temple or monastery sometimes became a hereditary position, passed from father to son over many generations.

Forest monasteries- most commonly found in the Theravada traditions of Southeast Asia and Sri Lanka- are monasteries dedicated primarily to the study of Buddhist meditation, rather than scholarship or ceremonial duties. Forest monasteries often function like early Christian monasteries, with small groups of monks living an essentially hermit-like life gathered loosely around a respected elder teacher. While the wandering lifestyle practiced by the Buddha and his disciples continues to be the ideal model for forest tradition monks in Thailand and elsewhere, practical concerns- including shrinking wilderness areas, lack of access to lay supporters, dangerous wildlife, and dangerous border conflicts- dictate that more and more ‘meditation’ monks live in monasteries, rather than wandering.