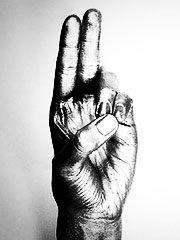 In Hinduism, a mudra (Sanskrit, literally «seal») is a symbolic gesture made with the hand or fingers. Along with asanas (postures), they are employed in yoga meditation practice. Each mudra has a specific meaning, and they are a central part of Hindu iconography. With the onset of Buddhism, many mudra practices were absorbed into the culture. Common hand gestures are to be seen in both Hindu and Buddhist iconography. An example would be the outward-facing open palm known as Abhay (without fear) mudra, a gesture meant to dispel the fear of the devotee.

Abhaya Mudra represents protection, peace, benevolence, and dispelling of fear. In the Theravada it is usually made with the right hand raised to the shoulder’s height, the arm bent and the palm facing outward with the fingers upright and joined and the left hand hanging down on the right side of the body while standing. In Thailand and Laos this mudra is associated with the walking Buddha often shown having both hands making a double Abhaya mudra that is uniform. The mudra was probably used before the onset of Buddhism as a symbol of good intentions proposing friendship when approaching strangers. In Gandhara Art it is seen used during showing the action of preaching and also seen in China during the Wei and Sui eras of the 4th and 7th centuries. The gesture was used by the Buddha when attacked by an elephant subduing it in shown several frescoes and scripts. In Mahayana the northern schools deities were often used it with another mudra paired by the other hand. In Japan when the Abhaya Mudra is used with the middle finger slightly projected forward it is a symbol of the Shingon Sect. (Japanese- Semui-in; Chinese- Shiwuwei Yin)

Bhumisparsa Mudra literally represents the Buddha as taking the earth as witness. It represents the moment when Buddha took the earth as testimony when he had resolved the problem of cessation of suffering while he was under the papal tree at Bodh-Gaya. Usually represented by the historical Buddha and Aksobhya sitting in the lotus position.The right hand touches the ground with the fingertips near the right knee extended or with only the index pointing down touching the ground with the left hand commonly resting on the lap with the palm facing up. It can also represent the subjugation of the demon horde of Mara. Aksobhya is often seen using this mudra while clutching part of his rode with his left hand. In Korea confusion of the high period led to rare imagery where Amitabha was using the Bhumisparas Mudra. (Japanese- Goma-in, Anzan-in, Anchi-in, Sokuchi-in; Chinese- Chudi Yin)

The Dharmacakra Mudra represents a central moment in the life of Buddha when he preached his first sermon after his Enlightenment, in Deer Park in Sarnath. Gautama Buddha is generally only shown making this Mudra, save Maitreya as the dispenser of the Law. This Mudra position represents the turning of the wheel of the law. Dharmacakra Mudra is formed when two hands close together in front of the chest in Vitarka having the right palm forward and the left palm upward, sometimes facing the chest.There are several variants such as in the frescoes of Ajanta, India the two hands are separated, and the fingers do not touch. In the Indo-Greek style of Gandhara the clenched fist of the right hand seemingly overlie the fingers joined to the thumb on the left hand. In pictorials of Horyu-ji in Japan the right hand is superimposed on the left. Certain figures of Amitabha, Japan are seen using this mudra before the 9th century. (Japanese: Tenborin-in, Chikichi-jo, Hoshin-seppo-in; Chinese: Juanfalun Yin)

The Dhyana Mudra is the gesture of meditation, of the concentration of the Good Law and the Sangha. The two hands are placed on the lap, right hand on left with fingers fully stretched and the palms facing upwards, forming a triangle, symbolic of the spiritual fire or the Triratna, the three jewels. This Mudra is used in representations of the Buddha Shakyamuni and the Buddha Amitabha. Sometimes the Dhyana Mudra is used in certain representations of Bhaisajyaguru as the Medicine Buddha, with a medicine bowl placed on the hands. It originated in India most likely in the Gandhara and in China during the Wei period. This mudra was used long before the Buddha as yogins have used it during their concentration, healing, and mediation exercises.It is heavily used in Southeast Asia in Theravada Buddhism however the thumbs are placed against the palms. (Dyana Mudra, Samadhi Mudra, Yoga Mudra; Japnese- Jo-in, Jokai Jo-in; Chinese- Ding Yin)

The Varda Mudra signifies offering, welcome, charity, giving, compassion and sincerity. It is nearly always used with the left hand for those whom devote oneself to human salvation. It can be made with the arm crooked the palm offered slightly turned up or in the case of the arm facing down the palm presented with the fingers upright or slightly bent. The Varda Mudra is rarely seen without using another mudra used by the right hand, typically with the Abhaya Mudra. It is often confused with the Vitarka Mudra, which it closely resembles. In China and Japan during the Wei and Asuka periods respectively the fingers are stiff and then gradually begin to loosen as it developed through time, eventually leading to the Tang Dynasty were the fingers are naturally curved. In India the mudra is used in images of Avalokitesvara from the Gupta Period of the 4th and 5th centuries. The Varda mudra is extensively used in the statues of Southeast Asia. (Japanese- Yogan-in, Segan-in, Seyo-in; Chinese- Shiynan Yin)

The Vajra Mudra is the gesture of knowledge. It is made making a fist with the right hand, index extending upward, and the left hand also making a fist and enclosing the index.

The Vitarka Mudra is the gesture of discussion and transmission of Buddhist teaching. It is done by joining the tips of the thumb and the index together, and keeping the other fingers straight very much like Abhaya and Varada Mudras but with the thumbs touching the index fingers. This mudra has a great number of variants in Mahayana Buddhism in East Asia. In Tibet it is the mystic gesture of Taras and Bodhisattvas with some differences by the deities in Yab-yum. (Sanskrit- Prajnalinganabhinaya, Vyakhyana mudra; Japanese- Seppo-in, An-i-in; Chinese- Anwei Yin)