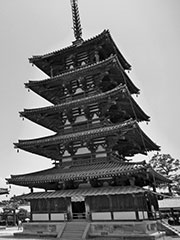 The temple was originally set up in 607 on Prince Shotoku’s instructions, and at the time it was called «Ikaruga-dera»(斑鳩寺).In 670 it was burned down, but gradually re-built until early 8th century. Later, it became a major religious center for Hossō Buddhism.

There is evidence that Paekche craftsmen and artisans provided the technical expertise to help build the Hōryū-ji. . There is the precedent of Paekche artisans building the first Japanese Buddhist temple, Hōkō-ji(Asuka-dera, end of 6C).