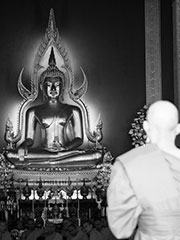 – The Buddha (Chn: 佛, Fó, Jpn: Butsu) is the Awakened One. see also The Tathagata and Sakyamuni Buddha.

– The Dharma (Chn: 法, Fǎ, Jpn: Hō) is the teachings or law as expounded by the Buddha.

– The Sangha (Chn: 僧 Sēng, Jpn: Sō) are the individuals comprising the: noble Sangha (Arya Sangha), those beings possessing some degree of enlightenment, and the ordinary Sangha (Bhikkhu Sangha) which refers to the community of people practicing the Dharma

The “Three jewels” are also symbolized by the triratna, composed of (from bottom to top):

The triratna symbol is also called nandipada, or “bull’s hoof”, by Hindus.