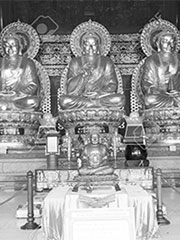 Many Buddhists in the Nikaya, Mahayana, and Vajrayana traditions consider there to be three type of Buddha: Samyaksam Buddha (often simply referred to as “Buddha”), Pratyeka Buddha, and Sravaka Buddha.

Significantly, the three types of Buddha appear only rarely in Theravada texts, while in contrast Mahayana literature frequently invokes these three archetypes. However, even within Mahayana traditions, the three types of Buddha do not necessarily correspond to an ultimate teaching, but rather one that fits within a program of skillful means (upaya) or expedient practices. Notably, chapter 3 of the Mahayana Lotus Sutra, compares the three types of Buddha to three vehicles, namely a goat cart, a deer cart, and an ox cart. That discussion is followed by the statement that Buddha “Firstâ€¦ preaches the three vehicles to attract and guide living beings, but later he employs just the Great Vehicle to save them.” That is Mahayana (meaning “greater vehicle” in Sanskrit, a description rejected by Theravadans) transcends the three types of Buddha, rather than corresponding to a method for attaining status as one of the types. In short, while the three-Buddhas archetype remains popular, it is not universal among Buddhists, some of whom maintain a tradition of ekayana, the single vehicle or direct path to awakening.