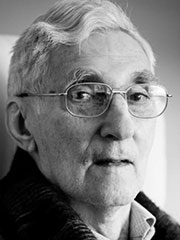 Sangharakshita (1925-) is the founder of the Western Buddhist Order, and the Friends of the Western Buddhist Order (FWBO). He is a prodigious author and public speaker on the subject of Buddhism, especially Buddhism in the West. A somewhat controversial figure, celebrated by his followers, suspected of heresy by traditionalists, and even hated by a few. Sangharakshita is a complex, enigmatic man, who can not easily be summed up.

Sangharakshita was born Dennis Lingwood in Tooting London, in 1925. During his childhood he was confined to bed for two years during which time he read prodigiously and started to become acquainted with art, culture and philosophy. At 16 he read a copy of the Diamond Sutra and had mystical experiences which confirmed for him that he was a Buddhist and always had been. During World War II he was posted to India, and after the war stayed on to pursue ordination as a Bhikkhu.

While he was waiting to be demobilised after World War II Sangharakshita decided that he was going to stay in India. He gave away his possessions and burnt his identification. For the next two years he and a companion wandered around India, mostly in the south. They lived of almsfood and practised meditation. During this period Sangharakshita met many well known Hindu teachers including Ramana Maharshi. He also made contact with the Mahabodhi Society. At the end of this period of wandering, Sangharakshita determined to seek ordination as a Buddhist monk. To this end he and his companion caught a train to Delhi and then made their way to Sarnath. The monks there were suspicious of this wild-looking pair that appeared out of nowhere and refused to give them the ordination. They then travelled on foot, during the hottest time of the year, to Kushinara where they were both given the shramana, or novice, ordination, by the Burmese monk U Chandramani. However, although they were ordained, U Chandramani and the other monks at Kushinara made it clear that he could offer nothing in the way of on going support, and suggested that they contact Bhikkhu Jagdish Kashyap in Benares. Kasyap, professor Pali at Benares Hindu University, welcomed Sangharakshita, who stayed on for 8 months studying Pali, Abhidhamma, and Buddhist logic. At the end of this period Sangharakshita and Kashyap went on a tour in the region of Darjeeling. Kashyap had been considering his own future, and was planning to leave the university. Consequently he, rather unceremoniously, left Sangharakshita in the hill town of Kalimpong with the injunction to «work for the good of Buddhism». Kalimpong was to be his base for 14 years until his return to England in 1966.

During his time in India Sangharakshita met many remarkable spiritual teachers, and although ordained for a few months in the Theravada school was always open to other forms of Buddhism. In particular Sangharakshita was influenced by Tibetan Buddhist teachers who fled Tibet after the Chinese invasion in the 1950s. Perhaps the most influential was Dhardo Rimpoche an incarnate lama who, like the Dalai Lama, is said to be reborn in the world again and again, out of compassion for beings. Dhardo Rimpoche was both friend and teacher to Sangharakshita, and gave him the Bodhisattva ordination — which consists of a series of vows which commit the ordinand to saving all beings, everywhere from all suffering, over as many lifetimes as it takes, by what ever means necessary. C. M. Chen was also a strong influence on Sangharakshita, teaching him about Ch’an and Vajrayana practices.

Return to the West

In the mid 1960s Sangharakshita received an invitation to visit England, to help with a dispute that had arisen at the Hampstead Buddhist Vihara. Sangharakshita’s ecumenical approach, which embraced many strands of the Buddhist tradition, was in contrast to the strict Theravadin style Buddhism at the vihara. This won him both friends and enemies. It did become clear that there was a desire and a need for the Buddhist teachings in England though, and Sangharakshita decided to stay in England. However after he had left for a farewell tour of India he received a letter telling him he was no longer welcome at the Hamstead vihara, and that he should not return. It seems that the vihara’s organising committee were unsatisfied with his approach, but were also influenced by rumours that his friendship with Terry Delamare was a sexual relationship.

The first home of the new movement was a basement shop in Monmouth Street in central London, where Sangharakshita not only led meditation, set out the cushions, made the tea, and cleaned up afterwards.

The FWBO and the WBO are an attempt to translate Buddhism into a western context without the sectarianism that seems to characterise Buddhism in the East. The FWBO is now a growing international movement.

Sangharakshita is a mixture of conservative and radical. He emphasises basic Buddhist teachings, like conditionality, and the Four Noble Truths, while at the same time disregarding teachings which he sees as no longer relevant. He was ordained as a Theravadin Bhikkhu, but sought Tantric initiations from Tibetan lamas.

Going for Refuge has become central to how Sangharakshita thinks about the Dharma. He sees it as the central act of being, or becoming a Buddhist. In response to suffering and dissatisfaction we seek refuge in a variety of places: relationships, sex, chocolate, material things. However, the only True Refuges, according to Buddhism, are the Three Jewels, i.e. the Buddha, the Dharma, and the Sangha. A Buddhist is someone who goes for refuge to the Three Jewels.

Another key theme of Sangharakshita’s teaching is the importance of friendship. Kalyana mitrata or spiritual friendship is lauded in the Buddhist scriptures, and Sangharakshita has ecouraged his followers to explore friendship as a spiritual practice. It is said for instance that the Order he founded is simply a network of friendships between people who are effectively Going for Refuge.

The order that Sangharakshita founded is neither monastic nor lay, and this aspect of his teachings has attracted much disapproval from traditional Buddhists. He wanted to de-emphasize the distinction between lay people and monastics because he had observed during his time in India that many monks were just going through the motions, and many lay people were devout and effective practitioners. Mahayana Buddhism has attacked the idea that only monks can practise effectively in such texts as the Vimalakirti-nirdesa-sutra, so Sangharakshita is not unique in this respect. However, the order he created, where effective Going for Refuge is central, is unique. Since Order members are not necessarily celibate it has meant that monks and nuns from traditional orders are unsure what to make of them, and usually decide that they are lay. However, most Order members consider themselves neither wholly lay (since they are often full-time practitioners), nor wholly monastic (since they do not necessarily follow the Vinaya).

Another teaching which Sangharakshita has emphasised is that the Buddha taught two types of Dependent Arising, or Conditioned Co-production. The first is familiar to most Buddhists and suggests that things arise in dependence on causes, and that we cycle between states such as birth and death, pleasure and pain. Reaching Nirvana from this perspective consists in cutting off the causes of birth and death. The second type says that some things arise in dependence on causes and proceed in a progressive manner so that suffering leads to faith, and faith leads to joy, and so on. From this point of view Nirvana arises in dependence on causes. This teaching is apparent in several texts in the Pali Canon, but seems largely overlooked by other Buddhists. It is important because it shows how Dependent Arising is an all-encompassing model of reality — i.e. it includes both the transcendental and the mundane worlds.