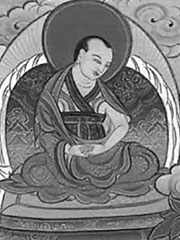 Longchenpa or Longchen Rabjampa (1308 — 1364 possibly 1369) was a major teacher in the Nyingma school of Tibetan Buddhism. Along with Sakya Pandita and Je Tsongkhapa, he is commonly recognized as one of the three main manifestations of Manjushri to have taught in Central Tibet. His major work is the Seven Treasures, which encapsulates the previous 600 years of Buddhist thought in Tibet. Longchenpa was a critical link in the transmission of the Dzogchen teachings. He was abbot of Samye, one of Tibet’s most important monasteries, but spent most of his life travelling or in retreat.

Apart from Longchenpa’s names given below, he is sometimes referred to by the honorary title «Second Buddha» (Tib. rgyal ba gnyis), a term usually preserved for Guru Padmasambhava and indicative of the high regard in which he and his teachings are held. Like the Third Karmapa Rangjung Dorje, he carried the title «Kunkhyen» (All-Knowing).

When he was in his late twenties two events occurred that were to be of decisive importance in his intellectual and spiritual development. One was a vision of Guru Padmasambhava and his consort Yeshe Tsogyal, and the other was his meeting with the great mystic Rigdzin Kumaradza (alt. Kumaraja). It was in the mountains that he met Rigdzin Kumaradza, who was traveling from valley to valley with his students under the most difficult of circumstances. Together with Rangjung Dorje, Longchenpa accompanied them for 2 years, during which time he received all of Rigdzin Kumaradza’s transmissions. Through the efforts of these three, the diverse streams of the «Innermost Essence» (nying thig) teachings of Dzogchen were brought together and codified into one of the common grounds between the Nyingma and Karma Kagyud traditions.

Longchenpa is widely considered the single most important writer on the Dzogchen teachings. He is credited with more than 250 works, both as author and compiler, among which are the famous Seven Treasures (mdzod bdun), the Trilogy of Natural Freedom (rang grol skor gsum), the Trilogy of Natural Ease (ngal gso skor gsum), and his compilation — plus commentaries — of the Nyingtig Yabshi. He is also a commentator of the Kunje Gyalpo Tantra (Tib., kun byed rgyal po’i rgyud; «The King Who Creates Everything»), a text belonging to the Mind Class (Tib., sems sde) of the Ati Yoga Inner Tantras.