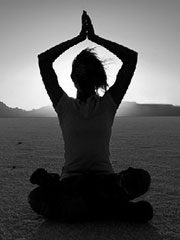 This article refers to the primordial state as considered in Tibetan Buddhism and Bon. For the monastery of the same name, please see Dzogchen (monastery)

Dzogchen is a state. The Dzogchen state is said to be the natural, primordial state of every sentient being, including every human being. When an individual is able to maintain this specific state continually, he or she no longer experiences dukkha, i.e., feelings of discontent, tension, and anxiety in everday life. (Compare with Nirvana. For more details see Nirvana and Dzogchen.)

The Dzogchen teachings are considered by some to be the pinnacle of the nine yana (Tibetan theg pa, vehicle, means of conveyance ) systems of the Nyingma (Tib. rnying ma) school of Tibetan Buddhism and the Tibetan Bön (Tib. bon) tradition. They are sometimes described as a set of «inner» or «heart» (Tib. snying thig) teachings. Practicing Tibetan Buddhists consider that the state pointed to by these teachings is indescribable, and can only be discovered through its transmission by an authentic Vajra Master.

Most teachers perform the transmission with student or, usually, students physically present. It is also possible to receive transmission from a teacher remotely (see Chögyal Namkhai Norbu Rinpoche).

The first master of the Dzogchen lineage in our world was Garab Dorje (Tib. dga’ rab rdo rje, Sanskrit *prahevajra) from Uddiyana (Tib. o rgyan). Padmasambhava (Tib. padma ‘byung gnas, gu ru rin po che) is the source of Dzogchen teachings in Tibet (Tib. bod), which are the heart of the Nyingma (Tib. rnying ma) tradition, with which they are primarily associated. Dzogchen has also been practiced in the Kagyu (Tib. bka’ brgyud) lineage, beginning with Milarepa (Tib. mi la ras pa) and most notably by the Third Karmapa, Rangjung Dorje (Tib. rang byung rdo rje). The Fifth, Thirteenth, and Fourteenth (present) Dalai Lamas (Tib. ta la’i bla ma) are also noted Dzogchen masters, although their adoption of the practice of Dzogchen has been a source of controversy among more conservative members of the Geluk (Tib. dge lugs) tradition.

The Dzogchen teachings focus on three terms: View, Meditation, and Action. To see directly the absolute state of our mind is the View; the way of stabilizing that View and making it an unbroken experience is Meditation; and integrating that View into our daily life is what is meant by Action.

Dzogchen is one of several recognized approaches to Nondualism.

The Practice of Dzogchen

In Dzogchen, self-liberation is achieved by discovering or recognizing one’s own primordial mental state and remaining in that natural state of primordial awareness in which all phenomena are experienced without creating karma through reaction, attachment, or conceptual labelling.

Sogyal Rinpoche, Chögyal Namkhai Norbu Rinpoche and other teachers provide different practical sets of instructions for the practice of Dzogchen. The central practice of Dzogchen teaching is Dzogchen contemplation. Silent and prolonged meditation is also used to allow the obscurations of the mind to dissipate like clouds dissolving to reveal the empty, luminous sky. Through meditation, it is possible to remove the conditioning of our minds and to glimpse our true nature.

According to some teachers (in particular, Chögyal Namkhai Norbu), Dzogchen is a practice rather than a doctrine or religion. It does not require the practitioner to be anywhere special; in fact, to be normally active while in a state of primordial or natural awareness is the ultimate practice of Dzogchen.

The goal of Dzogchen practice is to remain in the clear, undeluded state of the nature of the mind, unconditioned by thoughts — which is not the same thing as not having any thoughts, which is in any case impossible. At the beginning, a Dzogchen teacher introduces one directly (Tib. ngo sprod, introduce, point out) to the real nature of one’s mind, even if only for a few seconds; being a Dzogchen practitioner thus implies that one must have a qualified Dzogchen teacher, one who has mastered the nature of the mind. Historically, Dzogchen teachers have been very selective in choosing initiates, but current lineage holders in the Nyingma and Bön traditions have made Dzogchen teachings available to a wider (Western) audience.

Uses and Application for Ordinary People

Tulku Thubten Rinpoche of the Dharmata Foundation teaches that «being aware of one’s awareness» is a simple method for people to follow in practicing Dzogchen moment to moment. Consistency is the key to this method.