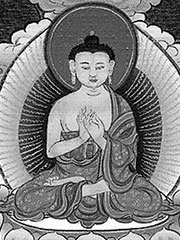 Prior to Garab Dorje, the Dzogchen teachings had been expounded only in celestial realms of the Buddhas and Devas.

Born in the land of Uddiyana, also the birthplace of Padmasambhava, Garab Dorje is said to have received all the tantras, scriptures and oral instructions of Dzogchen directly from Vajrasattva and Vajrapani.

Garab Dorje transmitted the teachings to Manjushrimitra, who was regarded as his chief disciple. Padmasambhava is also known to have received the transmission of the Dzogchen tantras directly from Garab Dorje.

Upon his death, Garab Dorje imparted his last testament to Manjushrimitra. These three precepts, known as the «Three Words that Strike to the Heart of the Essential Point» summarize the whole of the Dzogchen teachings: