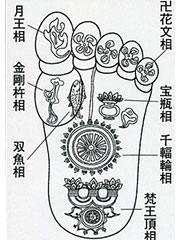 Buddhist symbolism appeared from around the 3rd century BCE, and started with aniconic symbolism, avoiding direct representations of the Buddha. Anthropomorphic symbolism appeared from around the 1st century CE with the arts of Mathura and the Greco-Buddhist art of Gandhara, and were combined with the previous symbols. Various symbolic innovations were later introduced, especially through Tibetan Buddhism.

Among the earliest and most common symbols of Buddhism are the stupa, dharma wheel, and the lotus flower. The dharma wheel, traditionally represented with eight spokes, can have a variety of meanings. It initially only meant royalty (concept of the «Monarch of the Wheel, or Chakravatin), but started to be used in a Buddhist context on the Pillars of Ashoka during the 3rd century BCE. The Dharma wheel is generally seen as referring to the historical process of teaching the buddhadharma; the eight spokes refer to the Noble Eightfold Path. The lotus, as well, can have several meanings, often referring to the inherently pure potential of the mind.

The swastika was traditionally used in India by Buddhists and Hindus as a good luck sign. In East Asia, the swastika is often used as a general symbol of Buddhism. Swastikas used in this context can either be left or right-facing.

Other early aniconic symbols include the trisula, a symbol use since around the 2nd century BCE that combine the lotus, the vajra diamond rod and a symbolization of the three jewels (The Buddha, the dharma, the sangha).

The first hint of a human representation in Buddhist symbolism appear with the Buddha footprint.

The 32 signs of a Great Man, and 80 Secondary Characteristics

Although the Buddha was not represented in human form until around the 1st century CE (see Buddhist art), the Physical characteristics of the Buddha are described in one of the central texts of the traditional Pali canon, the Digha Nikaya, in the discourse titled «Sutra of the Marks» (Pali: Lakkhana Sutta) (D.iii.142ff.).

These characteristics comprise 32 signs, «The 32 signs of a Great Man» (Pali: Lakkhana Mahapurisa 32), and were supplemented by another 80 Secondary Characteristics (Pali:Anubyanjana). These traits are said to have defined the appearance of the historical Buddha, Siddhartha Gautama and have been used symbolically in many of his representations.

The Mudras are a series of symbolic hand gestures describing the actions of the characters represented in Buddhist art.

Tibetan Buddhists make use of a particular set of eight auspicious symbols, ashtamangala, in household and public art. Some common interpretations are given along with each symbol although different teachers may give different interpretations:

International symbols of the World Fellowship of Buddhists

At its founding in 1952, the World Fellowship of Buddhists adopted two symbols. These were a traditional eight-spoked dharma wheel and the five-colored flag which had been designed in Sri Lanka in the 1880s with the assistance of Henry Steele Olcott.