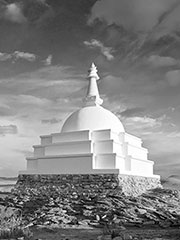 A stupa (from the Sanskrit) is a type of Buddhist structure found across the Indian subcontinent, Asia and increasingly in the Western World. Stupas are known in many Southeast Asian countries as chedi (from a Pāli synonym of stupa), and in some countries (particularly Sri Lanka) as dagoba (from Sanskrit dhatu— element, component, or relic + garbha — storehouse or repository).