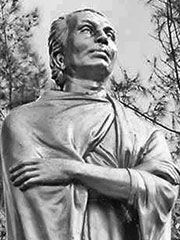 Anagarika Dharmapala (1864 — 1933) was born David Hewavitarne in Colombo, Sri Lanka. Sri Lanka was then a British colony known as Ceylon, so Hewavitarne’s state education was a Christian one: he attended Christian College, Kotte and the Colombo Academy. But the historical tide in Ceylon was beginning to turn in Buddhism’s favour. In 1875 in New York, Madame Blavatsky and Colonel Olcott had founded the Theosophical Society. They were both very sympathetic to what they understood of Buddhism, and in 1880 they arrived in Ceylon, declared themselves to be Buddhists, and publicly took the Refuges and Precepts from a prominent Sinhalese bhikkhu. Colonel Olcott remained in Ceylon and devoted himself to the cause of Buddhist education, eventually setting up more than 300 Buddhist schools, some of which are still in existence.

The young Dharmapala helped Colonel Olcott in his work, particularly by acting as his translator. Dharmapala also became quite close to Madame Blavatsky, who advised him to study Pāli and to work for the good of humanity — which is what he did. It was at this time that he changed his name to Dharmapala (meaning «Guardian of the Dharma«).

In 1893 Dharmapala was invited to attend the World Parliament of Religions in Chicago as a representative of «Southern Buddhism» — which was the term applied at that time to the Theravada. He was a great success and by his early thirties he was already a global figure, continuing to travel and give lectures and establish viharas around the world during the next forty years. At the same time he concentrated on establishing schools and hospitals in Ceylon and building temples and viharas in India. Among the most important of the temples he built was one at Sarnath, where the Buddha first taught. Here in 1933 he was ordained a bhikkhu, and he died at Sarnath in December of the same year, aged sixty-nine.

Dharmapala was the first anagarika — that is, a celibate, full-time worker for Buddhism — in modern times. It seems that he took a vow of celibacy at the age of eight and remained faithful to it all his life. Although he wore a yellow robe, it wasn’t of the traditional bhikkhu pattern, and he didn’t shave his head. He felt that the observance of all the vinaya rules would have got in the way of his work, especially as he flew around the world.