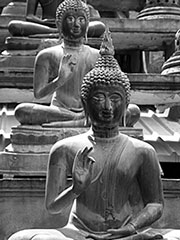 Vicara means the way mind maintains attention toward any object.

It first referred to hinduist yoga, later to buddhist meditation.

Vicara is a term of buddhist psychology. This term is mosly used to describe the internal feeling of the yogi who practices samatha bhavana, that is the meditation technique consisting in focusing the mind to one single point. Nevertheless, this term can be used to describe the practice of vipassana or even, outside of any meditation context, the simple fact to maintain awareness on any object.

In the meditation practices, the mind catches a mental object (see : vitakka), which means the meditator try to notice a feeling and to stay aware of it. He cultivates consciousness of this object – and the term object is understood as a psychological object, a perception.

Vicara is focusing on an object, and holding it in consciousness, to meditate on it – Like meditating over a candle flame. You meditate on the flame, watch it move, so eventually you are no longer yourself, but you can “become” the flame. The meditator focus all his attention on the object but not on the self image, or the distinction between himself and his environment.

Vicara eventually become one of the five factors of the first jhana.