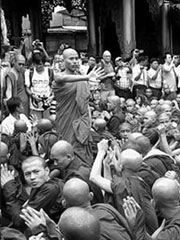 Vibhajjavada (Pāli), is an umbrella classification for Buddhist denominations that promote analysis as a primary tool for developing insight. The word Vibhajjavada can be broken into Vibhajja, loosely meaning “analysis”, and vada meaning animated discussion. Hence, the term “Vibhajjavada” can mean “animated analytical discussion.’

During the third Buddhist Council, all orthodox schools, which at the time were sub-divisions of Sthaviravada, were regrouped into this new school. These groups had split into different sects during the reign of Emperor Asoka. The Vibhajjavada school says that the first step to insight has to be achieved by the aspirant’s experience, critical investigation, and reasoning instead of by blind faith.

This school was introduced to Sri Lanka by the Venerable Mahinda, son of Emperor Asoka, who brought with him the Pali Canon. Vibhajjavada is an ancestor of the school known today as Theravada.