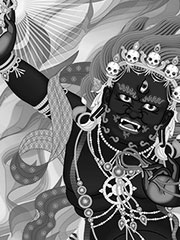 His taut posture is the active warrior pose (pratayalidha), based on an archer’s stance but resembling the en garde position in Western fencing. His outstretched right hand brandishes a vajra and his left hand deftly holds a lasso – with which he binds demons. He wears a skull crown with his hair standing on end. His expression is wrathful and he has a third eye. Around his neck is a serpent necklace and his loin cloth is made up of the skin of a tiger, whose head can be see on his right knee.

As Buddhism expanded in Central Asia, and fused with Hellenistic influences into Greco-Buddhism, the Greek hero Hercules was adopted to represent Vajrapani. He was then typically depicted as a hairy, muscular athlete, wielding a short “diamond” club .

In Japan, Vajrapani is known as Shukongōshin (執金剛神, “Diamond rod-wielding God”), and has been the inspiration for the Niō (仁王, lit. Benevolent kings),the wrath-filled and muscular guardian god of the Buddha, standing today at the entrance of many Buddhist temples under the appearance of frightening wrestler-like statues.