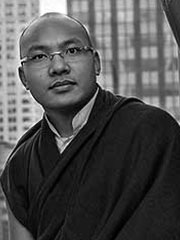 Over the 2000 Millennium he escaped to Nepal and then India, arriving in the Dalai Lama’s exile headquarters of Dharamsala on January 5, 2000. Urgyen Trinley Dorje had felt that he was unable to obtain in China the specialized instruction he needed to complete his studies and to realize his full spiritual authority.