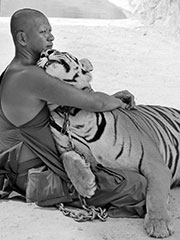 Tiger Temple, or Wat Pha Luang Ta Bua, is a Buddhist temple in Western Thailand which keeps numerous animals, among them several tame tigers that walk around freely once a day and can be petted by tourists.

The Theravada Buddhist temple is located in the Saiyok district of Thailand’s Kanchanaburi province, not far from the border with Myanmar, along the 323 highway. It was founded in 1994 as a forest temple and sanctuary for numerous wild animals. In 1995, they received the Golden Jubilee Buddha Image, made of 80kg of gold.

In 1999 the temple received the first tiger cub; it had been found by villagers and died soon after. Several tiger cubs were later given to the temple, typically when the mothers had been killed by poachers. As of 2004, three cubs had been born at the temple and the total number of tigers was ten.

These Corbetts Tigers spend most of the time in cages, being fed with dog food and washed and handled by monks. Once a day, they are led on leashes to a nearby quarry, where they can roam around freely. Tourists may observe this from some 10m away, and may even pet one of the tigers. So far, there has been one serious attack on a tourist.

The temple collects donations in order to build a larger tiger sanctuary which would allow the animals to live in an almost natural environment all day long, with plans to release some of the animals back into the wild.