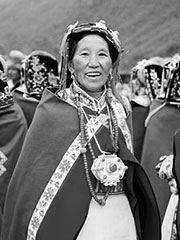 The Tibetan folk opera, known as Ache llhamo, which literally means “fairy”, is a combination of dances, chants and songs. The repertoire is drawn from Buddhist stories and Tibetan history.