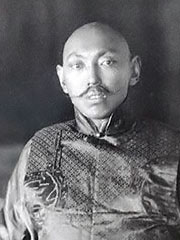 Thubten Gyatso (born February 12, 1876; died December 17, 1933), also spelled Thupten Gyatso, was the 13th Dalai Lama of Tibet. He was an intelligent reformer who proved himself a skillful politician when Tibet became a pawn in the great game between Russia, China, and Britain. He was also responsible for restoring discipline in monastic life and increasing the number of lay officials to avoid excessive power being placed in the hands of the monks.

Legislation was introduced to counter corruption among officials, a national taxation system was established, and a police force was created. As a result of his contacts with foreign powers and their representatives, the Dalai Lama showed an interest in world affairs and introduced electricity, the telephone and the first motor car to Tibet. Nonetheless, at the end of his life in 1933, he saw that Tibet was about to enter a dark age.

“Very soon in this land (with a harmonious blend of religion and politics) deceptive acts may occur from without and within. At that time, if we do not dare to protect our territory, our spiritual personalities including the Victorious Father and Son (Dalai Lama and Panchen Lama) may be exterminated without trace, the property and authority of our Lakangs (residences of reincarnated lamas) and monks may be taken away. Moreover, our political system, developed by the Three Great Dharma Kings (Tri Songtsen Gampo, Tri Songdetsen and Tri Ralpachen) will vanish without anything remaining. The property of all people, high and low, will be seized and the people forced to become slaves. All living beings will have to endure endless days of suffering and will be stricken with fear. Such a time will come.”