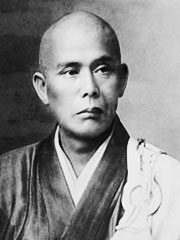 Despite his anti-war statements, Soyen served as a chaplain to the Japanese army during the Russo-Japanese War, which he believed to be a just cause. In 1904, the Russian author and pacifist Leo Tolstoy wrote Shaku in the hopes that he would join him in denouncing the war. Shaku refused, concluding that “.. as a means of bringing into harmony those things which are incompatible, killing and war are necessary.” (quoted in Victoria, 1997) After the war, Shaku would attribute Japan’s victory to its samurai culture, which he traced back to the nation’s amalgamation of Buddhism, Confucianism, and Shinto.