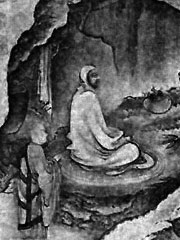 Southern Chan (pron. djenn) is the zen school that evolved from Hui Neng (Jap. Eno)—the sixth Chinese patriarch in the Dhyana tradition. At the same time there evolved the Northern School. The southern chan school is mainly considered the one that has maintained the ‘origin’ from Bodhidharma with its ‘sudden enlightenment‘ versus the northern school’s ‘gradual enlightenment’.

Hui Neng further propagated the idea of ‘no mind’ as a development of the previous wue of ‘one mind’. Southern chan is the tradition in which Lin Chi practised and today it is represented in China by the Hsu Yun school, in Japan by the Rinzai school and in Korea by the Chogye Order.- Dao Chuan Shih